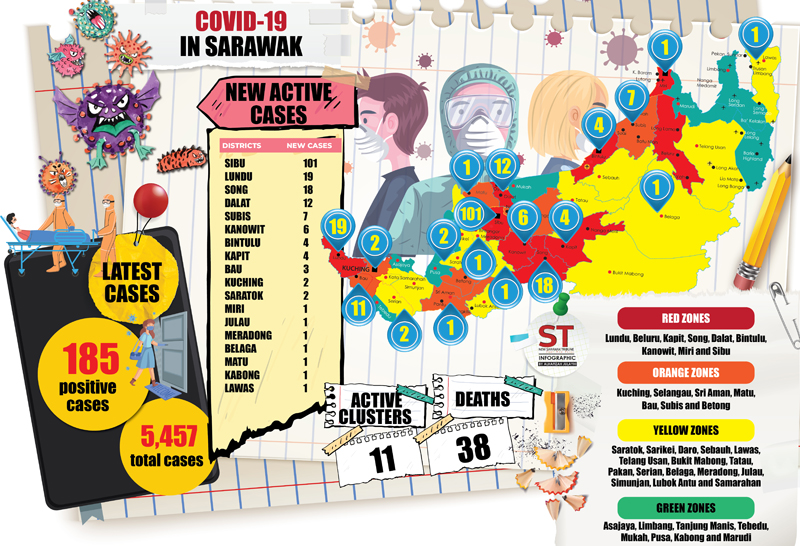 Sarawak Disaster Management Committee (SDMC) said there was no new death, so the toll remained at 48.

It said 19 cases recorded in Lundu involved the Pasai Cluster, and of the 18 cases reported in Song District, 12 involved the same cluster, while four were found through detection of cases that have close contact with positive cases; one was a symptomatic individual and had been screened at a health facility, while one was a health officer.

The committee said of the 12 cases recorded in Dalat District, three were from Pasai Cluster, while the remaining nine were individuals screened through active case detection (ACD) at locations under enhanced movement control order (EMCO).

SDMC said seven cases recorded in Subis District were related to Pasai Cluster, and of the six cases in Kanowit District, two were from the same cluster, while three were individuals screened through detection of cases that has close contact with Covid-19 positive case, and one involved an health officer.

As for the four cases recorded in Bintulu District, one involved the Jun Heng Cluster, one involved the Pasai Cluster and has been categorised as Import C case from Subis District, while one was an individual screened through detection of cases that have close contact with Covid-19 positive cases, and another one was a symptomatic individual who had been screened at a health facility.

The committee said for the four cases in Kapit District, the three screened are in Kapit Hospital and one was an individual screened through detection of cases that has close contact with a positive case.

Three cases in Bau District involved the Tabong Cluster, and of the two cases in Kuching, one was screened after returning from Selangor and the case has been categorised as Import B, while another case was an individual screened through ACD on targeted groups.

SDMC said of the two cases in Saratok District, they are symptomatic individuals who were screened at a health facility.

One case recorded in Miri District was an individual screened through detection of cases that have close contact with a positive case.

A single case in Julau District is a health officer.

The committee said one case in Kabong Distirct was screened for having a history of visiting Song District, and one in Lawas is via patient screened in the local hospital.

SDMC disclosed that 157 new cases have recovered and discharged from the respective hospitals with 72 from Sibu Hospital, Miri Hospital (60), Bintulu Hospital (12), Sarawak General Hospital (10) and three in Kapit Hospital’s PKRC (Covid Quarantine and Treatment Centre). These bring the total discharged cases to 3,602 persons or 66.1 percent out of the total.

It added there were 270 new persons under investigation (PUI) and 23 PUI are still awaiting their lab test results.

SDMC also said there were 452 persons under surveillance (PUS), bringing the total number in 83 hotels and quarantine centres in the state to 6,132.