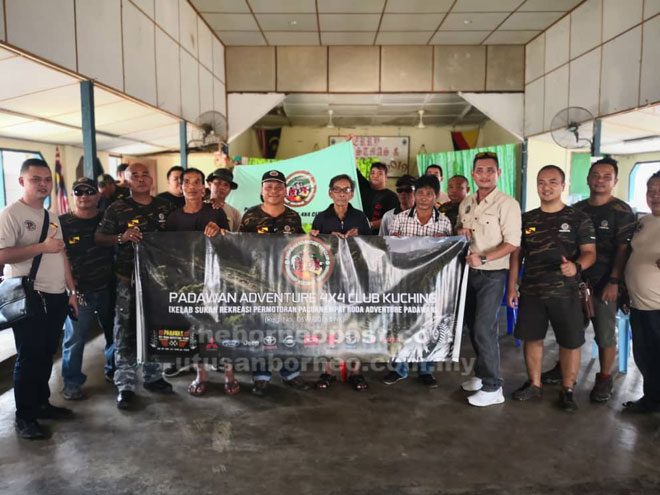 KUCHING: Padawan 4X4 Adventure Club has turned out to be more than just a motoring club given its active involvement in charity and community works since its establishment seven years ago.

Club president, Mercellinus Meran, said it has always been taking care of its members’ welfare and also involved in charity work where their services and assistance were needed.

Meran said among the charity and community service activities that the club has participated in the past seven years include helping to send food and clothing aid to fire victims in Bario and Lubok Antu.

“Our members also forked out donations from their own pockets for club members and their families who were hit with misfortunes such as illness and death.

“I am so impressed with the enthusiasm shown by many of the club’s members.

“For example, recently our club members contributed cash to two of our members who were hospitalised due to an accident and illness respectively,” he said.

Ramses Tawang and Laymong Harrison Sango, received RM1,500 each, presented to them by club patron Datuk Willie Mongin, who is also the Member of Parliament for Puncak Borneo.

“The amount of donation is not big but what is important is that the members contribute willingly and wholeheartedly in order to lighten the burden of affected members and their family.

“At the very least the financial assistance can assist to pay their treatment costs,” added Meran.

Meanwhile, during the Covid-19 pandemic, members of the club also helped the Puncak Borneo Service Centre in transporting and distributing food aid to families affected by the pandemic.

“Our members drove their own four-wheel drive vehicles to transport food items to the affected families,” said Meran.

He added that members of the club also participated in joint efforts such as seeing to houses affected by floods or fire.

Meran said besides continuing with the welfare and community activities, the club has also planned several activities, including organising a 4×4 race when the club’s track at Sikunduk, Kampung Semadang, Penrissen is ready for use.

Willie who recently called on those interested to register as members, said he was impressed by the roles played by the Padawan 4×4 Adventure Club and promised he will continue to support the club.