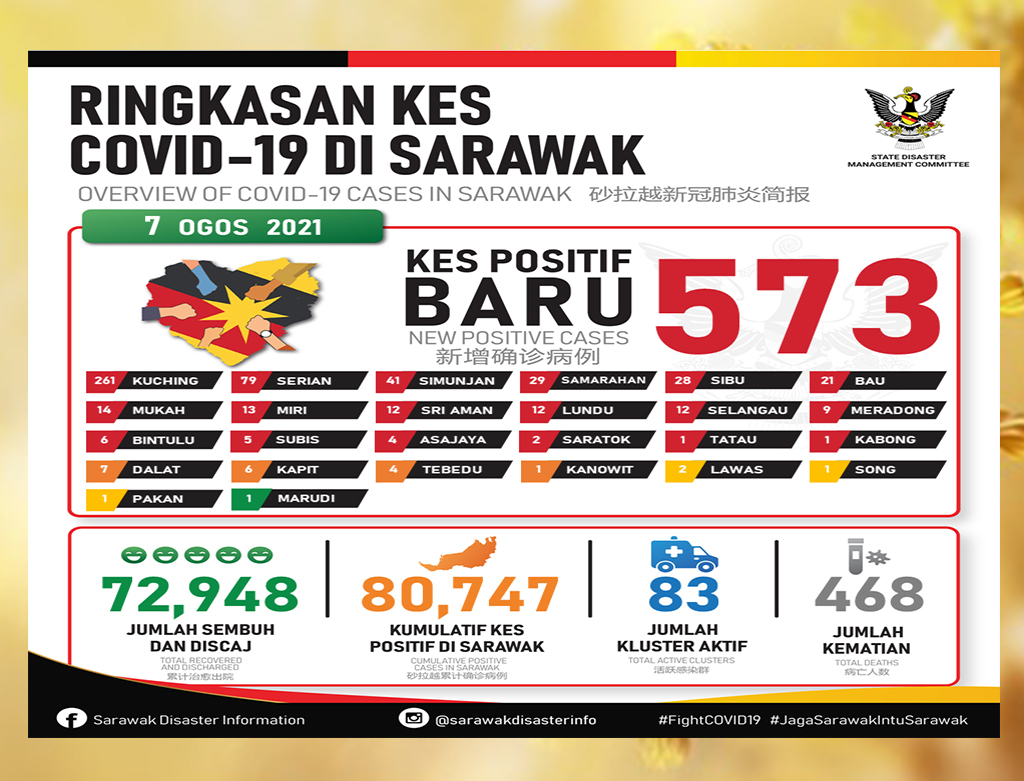 Sarawak Disaster Management Committee (SDMC) said the cumulative number of cases now stood at 80,747 while the death toll stood at 468.

There were nine cases recorded in Meradong; seven each in Subis and Dalat; and six each in Bintulu and Kapit.

Four new cases were recorded in Asajaya and Tebedu each; two each in Saratok and Lawas; and one each in Kanowit, Song, Marudi, Tatau, Kabong, and Pakan.

Meanwhile, SDMC said that there were 277 patients who had been discharged from hospitals and low risk quarantine and treatment centres (PKRC) statewide, bringing the number of active cases to 7,152.

The number of recovered and discharged cases now stands at 72,948 or 90.34 percent of the total number of cases in the state.

On another note, the committee added that the two fatalities were of those who had comorbidities.

The 467th death was a 22-year-old local woman from Kuching who was brought in dead (BID) to SGH. The case was tested positive on Aug 4 and had a history of obesity.

The second death was a 57-year-old local man from Serian who was admitted to SGH as well. He was tested positive on July 31 and had high blood pressure and dyslipidaemia.

SARAWAK will be a trailblazer for tabling the Land...

BY NEVILLE TIMOTHY SANDERS AMENDMENTS to the Land Code are...

CARING for the environment is no longer an option...
New Sarawak Tribune

MIRI: The construction of retaining walls along the Bungai...