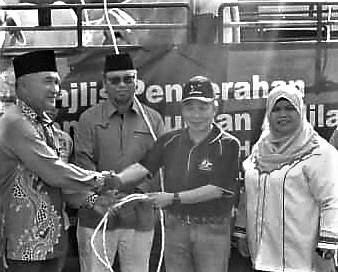 The meat will be distributed among the Muslim communities there.

“Each area will receive eight cows except Muara Tuang which receives 11 cows.  Muara Tuang will distribute the meat of three cows to several areas in Serian which formerly came under Kota Samarahan.”

Naroden (second right) at the handing over of the cows to LAKM as Rubiah (right) looks on.

Naroden was speaking during the handing over of the cows to LAKM at Bintawa Industrial Estate in Kuching.

“The contributions from LAKM may not be enough. Therefore, I urge assembly representatives to assist by donating more cows,” he said.