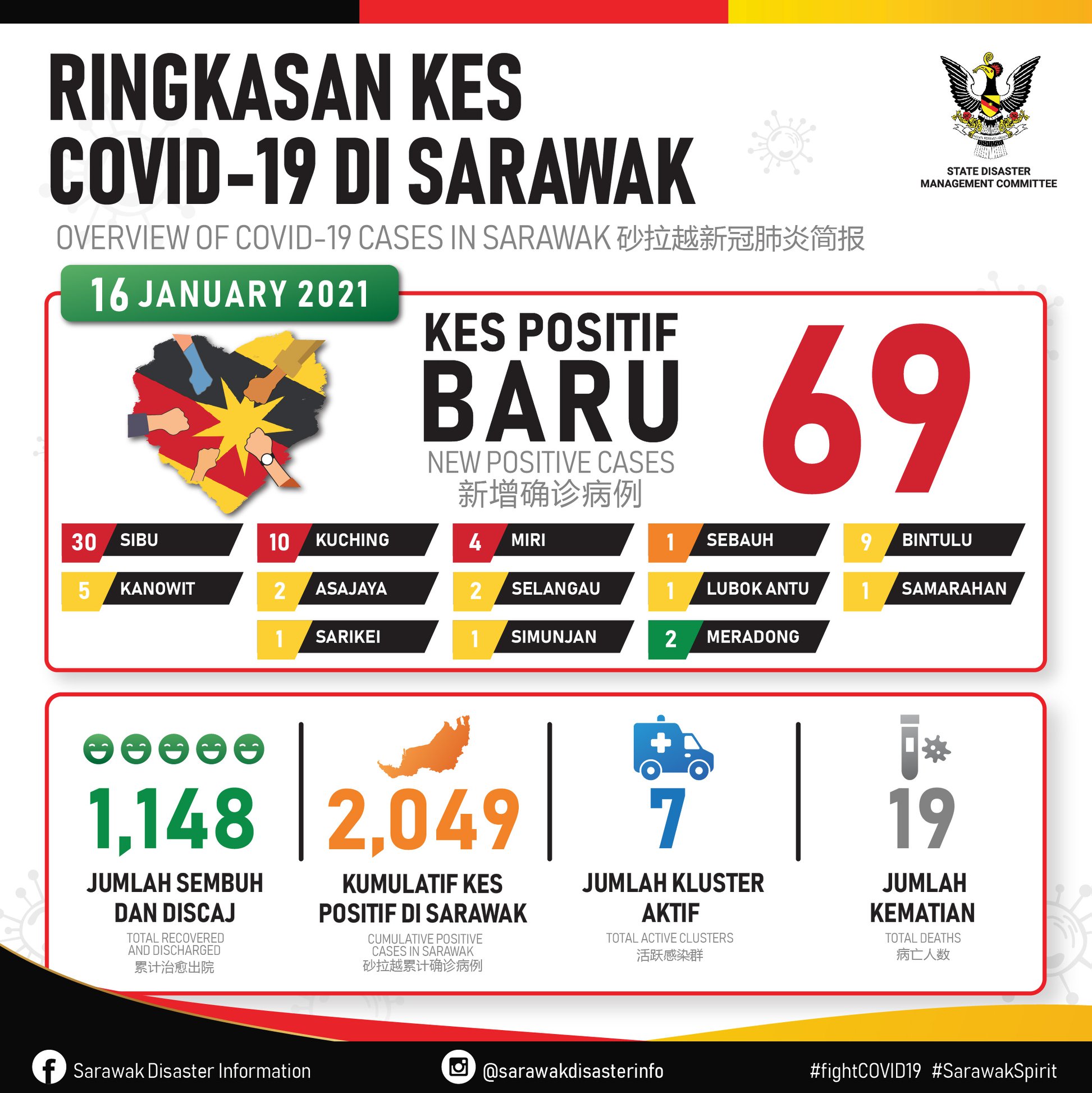 “For the 30 cases recorded in Sibu district, 29 involved the Pasai Cluster and one case was detected through self-screening at a private health facility,” he said at the SDMC Covid-19 update press conference today.

He said the 10 cases in Kuching district comprised eight individuals who had returned from Covid-19 risk areas (Selangor, Kuala Lumpur, Pahang, and Sabah), one who had contact with a positive case, and one involving the Stutong Cluster.

He said the nine cases in Bintulu district consisted of seven cases involving the Pasai Cluster, one who had contact with a positive case, and a non-citizen who had just come from Pakistan (Import A).

“The five cases recorded in Kanowit district involved the Pasai Cluster,” he said.

As for the four cases in Miri district, he said three involved the Jelita Cluster and the other was an individual who had returned from a Covid-19 risk area.

Uggah, who is also deputy chief minister, said the two cases each reported in Selangau District and Meradong district involved the Pasai Cluster.

“The two cases in Asajaya district were screened at a government health clinic in Sadong Jaya as they were exhibiting signs and symptoms of Covid-19. These cases are categorised as local infections,” he said.

He said the case in Lubok Antu district was screened as they had Severe Acute Respiratory Infection (SARI) when admitted into Sri Aman Hospital, categorised as a local infection case.

“The single case in Samarahan district is a local individual screened because they had Covid-19 symptoms. The case has a history of returning from a Covid-19 risk area, that is, Kelantan on Jan 3, and underwent quarantine at a quarantine centre,” he said.

He said the one case each reported in the districts of Sarikei, Simunjan, and Sebauh all involved the Pasai Cluster.

He said 11 cases had recovered and been discharged from hospitals on Saturday – seven from Sarawak General Hospital (SGH) and four from Sibu Hospital. This brought the total number of recovered and discharged cases in the state to 1,148 or 56.03 percent of total cases in Sarawak.

As of today, there were 882 individuals still undergoing treatment at hospital isolation wards in the state – 530 in Sibu Hospital, Miri Hospital (199), SGH (108), and Bintulu Hospital (45).

He said the districts of Simunjan and Asajaya had changed status from green to yellow, while Kuching, Sibu, and Miri districts remained as red zones and Sebauh district maintained its orange status.

Responding to a question on whether a ward at Kanowit Hospital had been put on lockdown, State Health Department (JKNS) director Dr Chin Zin Hing said there was a patient admitted into this hospital who was a Sari case.

“After that, the patient was found to be Covid-19 positive. If there are cases like this, we will close the ward temporarily to conduct sanitisation works, but we will open it again after all this work is done,” he said.