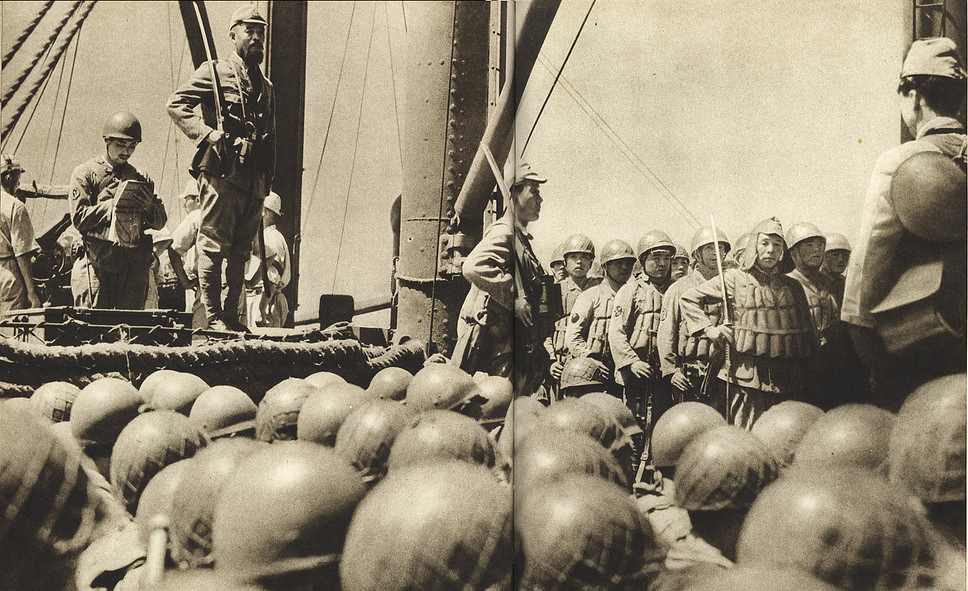 End of a reign of terror

On September 11 1945, Sarawak was liberated from the Japanese who occupied the state in a reign of terror for almost four years. It was a historic day when Sarawak became the last important Japanese stronghold to surrender to the Allied Forces after the Imperial Commander of Borneo Lt General Baba had days earlier signed the surrender document in Labuan.
A month after the Allied Forces had launched an invasion of Labuan and other important Japanese locations in Indonesian Kalimantan, news of the bombing of Hiroshima and Nagasaki on August 6 and 11 respectively had sealed Japan’s fate. Japan surrendered three days later on August 14.

Brigadier General Thomas Eastick waited patiently at 2 pm on September 11, 1945 for his counterpart Major General Yamamura to turn up at a warship anchored in Pending. But the Japanese failed to turn up and after a frantic search, he found Yamamura waiting at the dockside of Pending with two interpreters.
As he boarded the HMAS Kapunda, the neatly dressed short and stocky general walked up to the front portion of the ship through a guard of honour from the Australian army and navy to a small table which was draped with the British flag.

At 2.40 pm sharp, Yamamura signed three copies of the surrender document. Yamamura, who was recovering from Malaria smiled weakly then stood up and then handed over his sword which was held horizontally with both hands to Eastick. In the late 1944s when the Allied Forces were gaining ground through their covert secret operations, Japan realised that the war was lost.
In the last weeks before the capitulation of the Land of the Rising Sun, local Sarawakians had already joined hands with the Australian and European liberators.

On March 25, 1945 Major Tom Harrison and seven operatives from “Semut 1” elite commandos parachuted into Bario and raised an army of native soldiers.Later, 70 Operatives from Semut 2, 3 and 4 infiltrated into various parts of Sarawak who together with Kelabit, Murut (Lun Bawang), Kayan, Kenyah, Bisaya, Malays and Kadayan of Lawas, Baram, Bintulu, Kapit and Sri Aman killed more than1,000 Japanese, many of them beheaded. At least a dozen brave Iban warriors, including former constabulary officers Michael Juan and Edward Brandah and Cpl Ragam Lansam, led separate teams to attack the Japanese in Northern Sarawak. 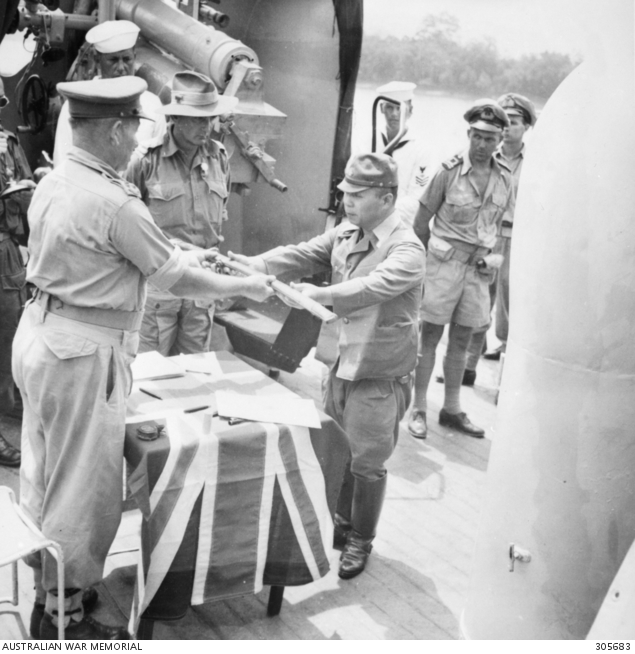 Born in Kuching in 1915, Michael was the son of Sgt Frederick Juan of the Sarawak Rangers. After passing his Standard Seven examinations, Michael joined the Sarawak Constabulary before he was joined by Edward Brandah. In 1933, six months after training as a recruit at the Police Training School (PTS) across the river, Michael was promoted to the rank Probationary Inspector (PI) and sent to become the officer-in charge-of the Bau District.

After a short stint in Sarikei just before the War, Michael Juan was posted to Kapit where he headed the district but left the police force when the Japanese took over. In 1945, he welcomed the “Semut” operatives in Kapit led by Major W.L.P “Bill” Sochon and joined the guerrillas in the fight against the Japanese. Michael’s cousin Edward Brandah, had a short stint as a teacher before he became a probationary police inspector in 1937 and served in Miri. 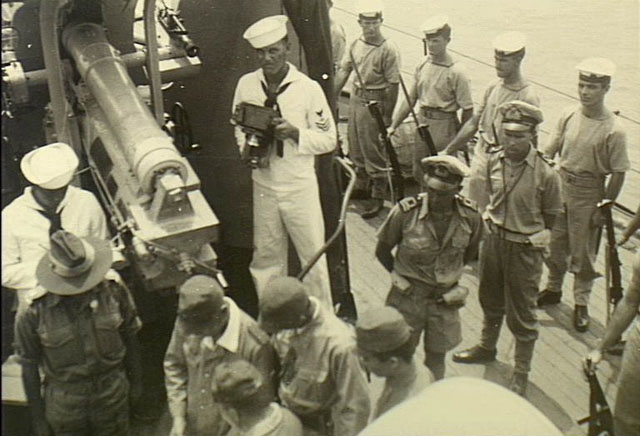 When the War broke out, Edward also refused to work for the Japanese. A Colonial government loyalist, Edward was taken prisoner by the Japanese and released after two weeks’ interrogation on condition that he relocated his family to one of the villages in the jungle. In an interview with Datuk Brandah’s son John Edward, he disclosed that his father left Miri and settled in the longhouse of Penghulu Barat Mamut, 60 miles away from Miri in the Ulu Sebuti area, together with three other Iban constables. He said: “They came under the protection of Penghulu Barat who supported the fight against the Japanese because he was a former Sergeant in the Sarawak Rangers. I In the longhouse, my father and the constables maintained their barrack discipline as if they were in the constabulary and over time the 24-door longhouse became a model village.”

In June 1945 when the Allied Forces captured Labuan and Brunei, Edward received a message from the “Raja Muda” Anthony Brooke to help the war.
In mid-July Edward organised a group of Ibans and some Indian nationals who had escaped from the Miri prison after it was bombed by the Allied Forces and launched some raids. Later, they were joined by Javanese soldiers who had also escaped from the prison where they were tortured and were waiting to exact their revenge on the Japanese tormentors.
On July 25, Edward Brandah’s group of a dozen guerrillas ambushed 30 Japanese fleeing Miri. In the attack, 12 Japanese were killed as the others fled. Edward lamented that some of his men had disobeyed him and had taken heads. 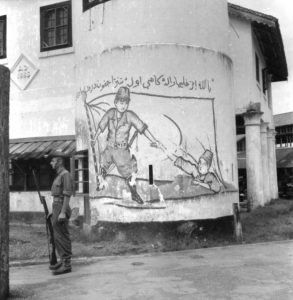 As Edward and his men prepared to launch an all-out anti-Japanese war, an Australian army warrant officer, Donald Horsnell turned up to meet him in a village not far from Mamut. Brandah eventually made contact with SRD commander Major C.S. Carter on July 27, 1945.
After discussions with Horsnell, he then met Major Carter of the SRD on board the Tiger Snake craft on July 27, 1945. From there they flew by a Catalina “flying boat” to the Allied Forces headquarters in Marudi along the Baram.

Edward met Major Pollet and Major Talbot in Marudi and later Brigadier General Macaskie on a P.T. boat heading for Labuan.
As the Allied Forces continued to organise follow-up operations against the remaining Japanese troops, the Kempetai headquarters at Jalan Jawa discovered that Edward’s family was based in Kuching.

John added: “Furious with his action, the Japanese came after the family. My mother and five of us were forced to flee to Marudi which by then had been captured by Allied Forces. During the river and land journey to Marudi, we were escorted by two Australian soldiers.” “With the return of the Allied Forces, another group of Iban guerrillas led by Lance Corporal Ragam Lansam were joined by SRD Sgt Bob Mason and they continued to harass the Japanese.

When the Brandah family was safe in Marudi, Edward joined the 9th Australian Division under Macaskie. On August 25, Edward flew by the RAAF’s Catalina flying boat from Labuan to Kanowit where he met his cousin Michael Juan, an old colleague Sgt Embah, and Major Bill Sochon. On September 12, a day after the Japanese surrender at Pending, Edward Brandah was the only Sarawak Constabulary officer on board the US navy landing craft No 1310, which arrived in Kuching.

Back in Kuching and under Captain Marlowe, the reinstated Inspector Brandah was tasked with assisting the reorganisation of the Sarawak Constabulary. One of his biggest assignments was to protect the local collaborators from reprisals. 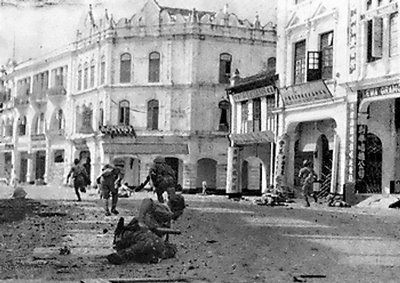 John explained that his father “had to stay with the prisoners day and night until all the interrogations were done. I remember that in Kuching I and another relative, Edward Mansel (whose father was one of the victims of the Long Nawang massacre) were given the task of sending food to my father”.

Abang Jo: No, we’re not giving away our rights

Celebrators urged to dress up for Raya