THROUGH Sarawak’s own well-known, prolific author James Ritchie’s book “Abdul Taib Mahmud: 50 Years in the News”, readers can get a glimpse of some unpublicised yet significant political events in the State as well as the life of Sarawak’s 4th Chief Minister Abdul Taib Mahmud, 81, who has spent his good 50 years in politics to transform the State. Excerpts from James book will be published by New Sarawak Tribune twice a week on Wednesday and Sunday. 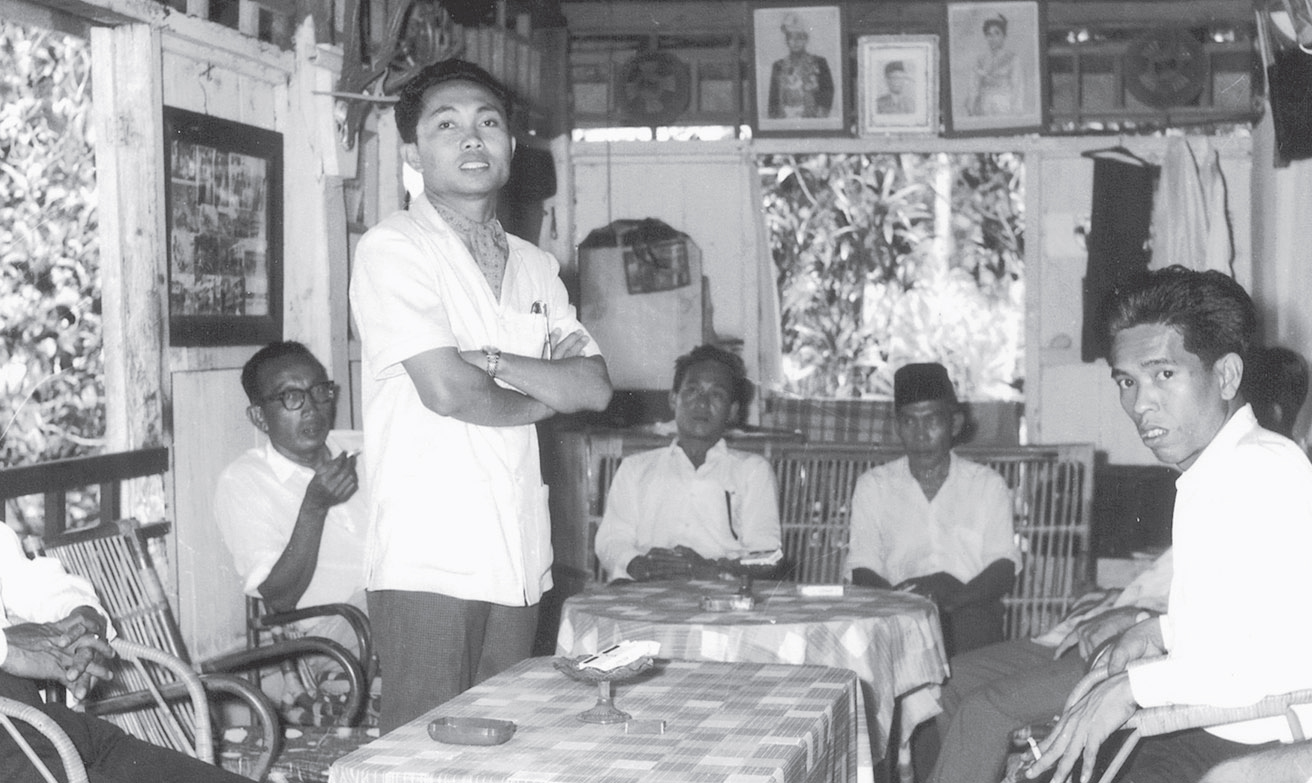 Taib (standing) with coastal folks during one of his regular visits.

“We hope to build a road cutting through virgin jungle to link Kuching and Sibu, which are more than 300 miles apart, by 1966.”

This important stretch would ultimately become the Kuching-Sibu “highway” connecting the towns of Serian, Sri Aman, Saratok and Sarikei many years later when Taib had been reassigned as a Federal Minister in Kuala Lumpur.

However, by 1965, the Public Works Department (PWD), which was under Taib’s ministry, was urged to speed up and managed to develop 65 miles of roads. It was at this time that Taib developed a style that would cut through red tape and deal with issues on a personal level with the people directly responsible. Even though some of the colonial bosses snubbed the locals and thus found it hard to get their co-operation, Taib found a friend in the Director of the PWD, Ian Wardzala, a Briton of Polish descent.

They decided that the best way to speed up the construction of roads was to establish more road building units and after two years in his portfolio, he increased the number of units from five to 13. Taib continued to push for development, not forgetting the rural areas.

Speaking to his constituents at Kampung Tambirat in Samarahan, he said the only way the state would progress was if the people were willing to work hand-in-glove with the government. Taib said the task of transforming Sarawak which was “three quarters jungle”, needed a grand effort by everyone.

“It is so big that you ought not to leave most things in the hands of the few who work in the government. The people should move in unison with the working of the government machinery which tries to stimulate economic development.”

In September 1964, Taib announced that nine bridges would be built between Sri Aman and Saratok and named after Australian towns as a mark of appreciation for the aid given towards the state’s road construction programme.

Proving that he was not anti-White, Taib said that the PWD had derived great benefits over the past two years from Colombo Plan aid from Australia. Apart from offering $2.5 million worth of tractors, graders and rollers, they were also helping to build the $13 million General Hospital and contributed another $5 million for the ongoing Sarawak Development Plan.

“By all the various forms of aid Australia has proved that she is our friend in time of need, a real friend indeed. All the aid Australia extends to us in whatever form it may be is accompanied by the deepest feeling of friendship.”

From the early days Taib had already emphasised the urgency of education and nation-building. During a visit to the “Fair Land Sarawak” exhibition at the Batu Lintang Teacher’s Training College he said:
“We want to instil a spirit of nationalism in the better sense of the word, and nothing contributes more than a good knowledge of the country and the people and their condition of life to build a really solid united nation.

“The role of education is the more important in this than the role of political parties.”

Education was Sarawak’s top priority as it would ensure the future generations would have a better life. In 1970, about 80 percent of the 1.5 million pupils in Malaysia came from the rural areas.

Out of this almost 50 percent of the primary school students stopped schooling after primary six, although they were automatically promoted to form one. It appeared as if the problem was compounded by poor Bumiputera parents who could not afford to send their children to school.

If the situation was bad in the peninsula, it was much worse in the rural Sarawak outback where the poverty level was at least 50 percent.
“Such a situation is saddening as in this progressive age we cannot allow our children to stop schooling because of minor difficulties. I fear that if we do not take heed of this situation, Malay children will be left behind.”

Taib said that the Bumiputeras – Malays as well as natives of Sarawak – must be bold enough to take on the challenge of changing their attitude towards modernisation. He said that instead of keeping their children in the kampungs, these rural parents must be prepared to make sacrifices to enable their children to progress.

On air travel, Taib made it a point to suggest a merger between Malaysia Airways and Borneo Airways to ensure that Sarawak would not be cut off from the rest of the world. The aim was also to facilitate a more efficient service between Kuala Lumpur, Singapore, Kuching and Jesselton (Kota Kinabalu).

It was suggested at a discussion with the Federal Minister of Transport Dato Sardon Jubir and Malaysian Airways General Manager K.R. Hamilton in Singapore that a “blueprint for the merger” would be submitted to the Sarawak cabinet for approval.

The Sarawak Minister for Works said:
“Far from becoming less important, Sarawak will, because of its lack of a road system linking the various divisions, get a great deal of attention by our air transport organisation after the merger.

“I have confidence that the people of Sarawak will be happy to have, with the merger, new and improved internal services within the interior of Sarawak.” (Straits Times, May 10, 1964) Taib said the merger would ensure a uniform rate of fares all over Malaysia and the scheme of training would include the training of Sarawakians and Sabahans who were trying to speed up Borneonisation.

In September 1964, Taib, as deputy president of BARJASA, was one of the Sarawak representatives invited to attend the UMNO general assembly in Kuala Lumpur.

James Alexander Ritchie
View All Posts by Author
Naim makes Ramadan contributions to mosques, suraus
Previous Post
RM274,000 in allocations for mosques, suraus and JKKKs
Next Post
You May Also Like