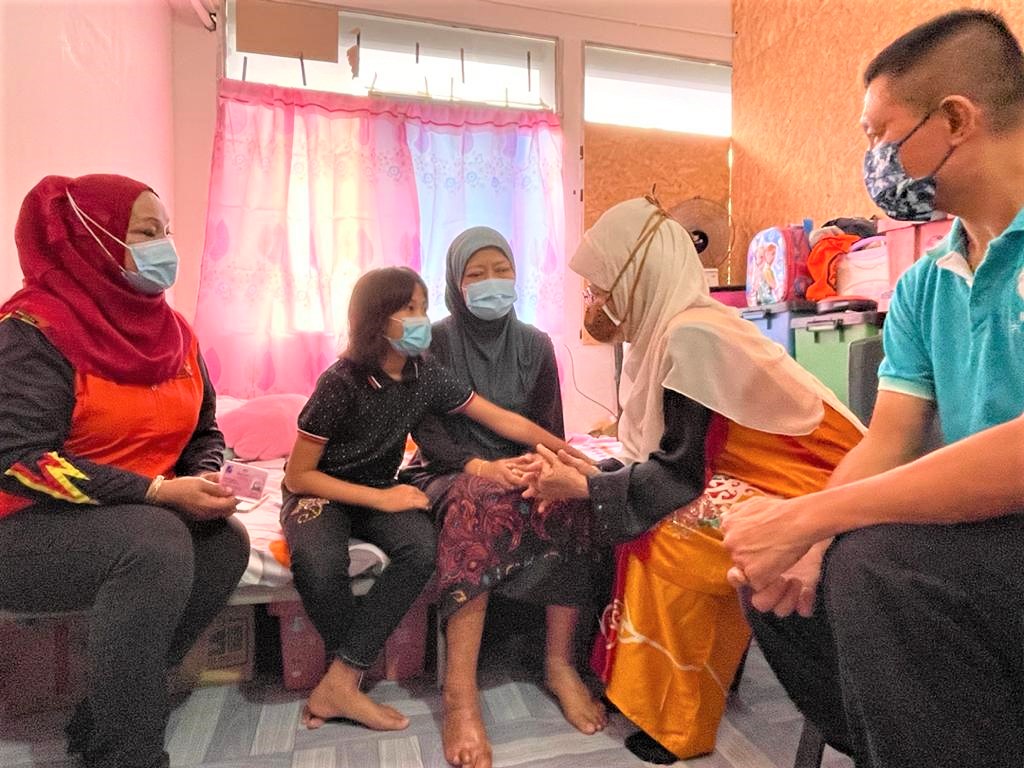 Aid for blind mother and daughter

KUCHING: A single mother who is blind and her only daughter here were all smiles when the State Social Welfare Department (JKM), Yayasan Sarawak, and several non-governmental organisations (NGOs) came forward to look into their needs and offered help in the form of cash and essential items.

Norlela Bujang, 50, lost her left eyesight in Jan this year and currently only her right eye can see shadows; she also has other complications — swelling on both legs, and also had an operation on her foot due to diabetes. She is currently renting a small room on the first floor of a shop lot in Jalan Satok here.

The blind mother fully depends on her nine-year-old daughter Nurfatihah Shahmnan to move around and even when going to hospital to receive treatment.

The Minister of Welfare, Community Wellbeing, Women, Family and Childhood Development Datuk Seri Fatimah Abdullah today took time off from her busy schedule to see for herself the condition of Norlela and the living situation.

“Today I have come to visit Norlela and her daughter to see for myself how their condition is. And From what has been observed and on the advice from Fire and Rescue Department (Bomba), the current living space is unsafe and not conducive as there is only one entrance and exit, and the materials used for the room’s wall are easily flammable.

“Not only that, it is difficult for her mother to climb up and down the 20 steps on the staircase,” she said during the visit.

Thus JKM has made efforts to locate a much suitable place to stay, and the department is in contact with Housing Development Corporation (HDC) and requested that the mother and daughter be given priority in obtaining a residence, the minister pointed out.

“Secondly, the daughter has made a big sacrifice to stop school to look after her mother because she is worried about leaving her mother alone due to her health problems.

“But we feel that it is important that she continues to receive her education, and with that, the solution will be to get volunteers from the JKM’s Home Help to be with the mother and give her medicine like insulin, hypertension, and cholesterol on time when Nurfatihah goes to school,” she said.

Fatimah said with this, the daughter can return to school and focus on her studies without having to worry about her mother.

“Nurfatihah is being enrolled at SK Enche Buyong that is far from the rented room, and the Education Department will assist to transfer her to a school closer only after they have moved to a suitable place,” she said.

On another note, Fatimah thanked those that had helped the needy especially the urban poor.

The assistance will be able to lessen their burden such as paying rent and transport to get to the hospital while the mother and daughter are waiting to move to a better place, she said.

In addition Hope Place also presented RM2,000 cash which was raised by a lecturer from University Malaysia Sarawak (Unimas).

Meanwhile, Sibu 4×4 Owners Club also donated RM10,000 and from this total amount, RM500 will be given monthly to Norlela to pay rentals and transportation to get to the hospital.

According to JKM’s report, before Norlela and her daughter moved to where they are staying now, they were both evicted at a rental house in Taman Sukma because they could not afford to pay the full rent of RM800 monthly after one of Norlela’s friend moved out.

They were then assisted by Yapiem and were moved to stay at the current location, which has 11 rooms and has only a bathroom.