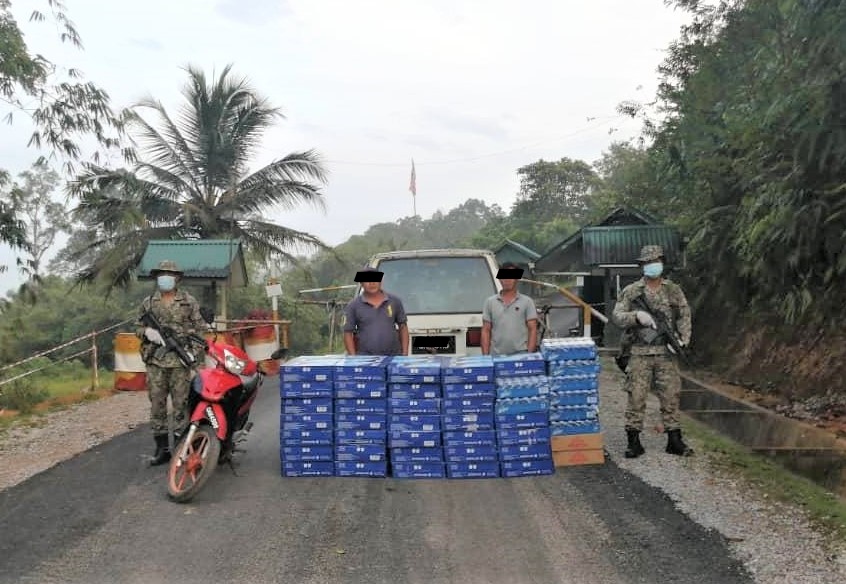 BAU: Yesterday, the Army conducted two operations ― Ops Awas and Ops Benteng ― which were both a success.

In Ops Awas, they thwarted an attempt to smuggle alcohol worth RM23,000 through the Sarawak-Kalimantan border in Serikin.

According to a statement, a patrol came upon a motorcycle and a van at a ‘rat trail’ around 5am.

The two vehicles were stopped and upon inspection, 120 cartons of alcohol of various brands were found.

“Two local men aged 39 and 42 were arrested on suspicion of trying to smuggle the contraband into the neighboring country using the ‘rat trail’.

“The suspects, along with the confiscated items, including mobile phones, were taken to the Bau District Police Headquarters (IPD) for further investigation,” the statement read.

In the second operation Ops Benteng, 11 individuals were nabbed for trying to leave the country illegally on three motorcycles through a ‘rat trail’ near an oil palm field in Serian, around 9am.

The individuals comprised eight Indonesians and three locals, and were arrested about four kilometres from the border.

“All of them－four men, five women and two children－along with the confiscated items, including motorcycles, with an estimated worth of RM12,500, were then taken to the Serian IPD for further action.”