BUKIT MERTAJAM: Despite currently facing the most bitter ordeal in his political career after he was linked to a pornographic video, Minister of Economic Affairs Azmin Ali is still optimistic and vows to continue serving by ensuring his ministry can formulate several new policies to ensure a more sustainable generation of the national economy.

Azmin, who appeared calm when met by reporters after attending a Seberang Jaya State Assembly Constituency Aidilfitri Open House here today, expressed the hope by focusing on returning the confidence of foreign investors to the Malaysian market. 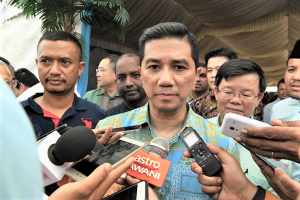 “I must have a lot of patience and will continue to persevere, and I am confident it is the dirty politics of desperate losers who no longer receive the support of the people. But for me, as a leader, we must be firm with this matter.

“My focus now is to continue ensuring the Ministry of Economic Affairs can formulate new policies and we have started discussing about the 12th Malaysia Plan since last month,” he said.

He said that this was because the government wanted new approaches to be taken to ensure the generation of a more sustainable economy and could bring back the confidence of foreign investors in Malaysia.

“I see positive developments and we give focus to the country’s new revenues and technologies such as Artificial Intelligence, digital and others because these can generate growth and new resources of the nation,” he said.

Earlier, in his speech, Azmin stressed that he would fight all out to oppose any quarters and individuals who were involved in dirty politics.

“As a leader in the party and in the government, I want to declare that any quarters, any individuals who are involved in dirty politics, I will rise and fight them. We will not allow those who are greedy because of their uncontrollable desire to master the situation, we want political stability, we want the peace under the leadership of Prime Minister Tu Dr Mahathir Mohamed to be continued for the sake of the people and the Malaysian nation.

“Believe me, matters like this we can tackle wisely when we have a strong unity. I thank my colleagues who give their support whether in the party and in the government,” he said.

Prior to this, a pornographic video purportedly linking Mohamed Azmin and another man viraled on the internet while it was also alleged that a certain sum of money from a company was deposited into an account belonging to the minister. – Bernama

5G expected to bring changes for the benefit of people

50 pct off on traffic summonses from Jan 18

LICT in CityOne from next month