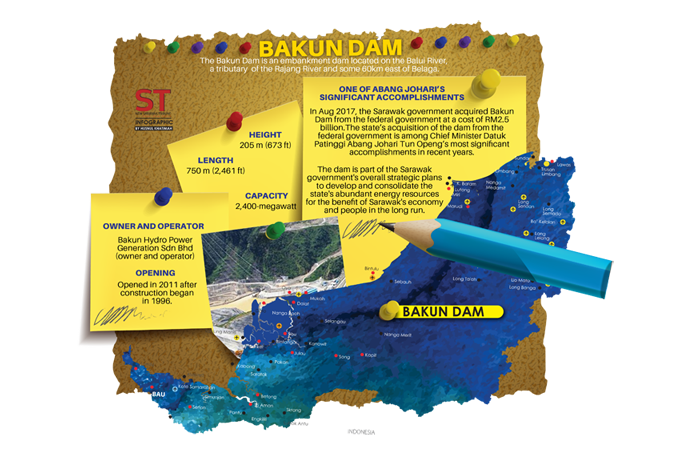 The acquisition of the Bakun hydroelectric plant (HEP) from the federal government was made with Sarawak’s long-term future in mind.

When Chief Minister Datuk Patinggi Abang Johari Tun Openg announced the acquisition agreement in March 2017, he remarked that with the power, the state could venture into the digital economy.

The strategic acquisition was indeed a significant feather in the Sarawak government’s cap, as Bakun HEP is the largest hydropower plant in Malaysia and one of the two largest in Southeast Asia, with an installed capacity of 2,400MW.

With a towering height of 205 metres, it is also among the tallest concrete face rock-fill dams in Southeast Asia.

Its construction began way back in 1996 and it started operating in 2011.

August 16, 2017 was a day to remember. It was the day when Sarawak Energy Berhad (SEB) officially took over Sarawak Hidro Sdn Bhd (SHSB) (now known as Bakun Hydro Power Generation Sdn Bhd), the owner and operator of Bakun HEP.

The entire equity interest of SHSB was acquired from the Ministry of Finance Inc and Federal Lands Commissioner for RM2.5 billion.

In addition to the acquisition cost paid to Putrajaya, SEB had also taken over the servicing of SHSB’s outstanding loan of about RM6 billion.