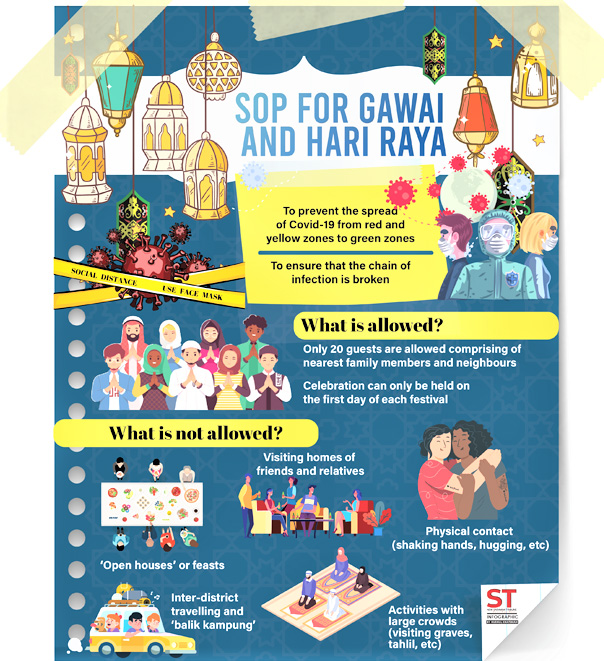 KUCHING: The ‘balik kampung’ travel involving movements between districts is not allowed during the coming Hari Raya Aidilfitri and Gawai Dayak celebrations in Sarawak.

“For Hari Raya and Gawai Dayak, the celebration is only allowed on the first day of the festival with the maximum presence of only 20 individuals comprising family members and neighbours,” he said.

Among other prohibited activities are visiting homes of relatives and friends, open house, handshakes or any physical contact as well as visiting graveyards and other activities of tradition such as ‘tahlil’ and Hari Raya feasts.

On behalf of the state government, Uggah apologised for making such a decision on the festivals which would not be to the liking of Sarawakians but the effort must be made to ensure the chain of Covid-19 transmission can be broken.

“That is why in Sarawak, we do not allow movement from district to district because we do not want the Covid-19 red zone or yellow zone to spread the disease to the other zones, especially in the interior and the rural areas.

“So I hope the people of Sarawak would be patient and understand the necessary decision we made in the interest of your health and that of the family and community in the fight against Covid-19,” he said.

Uggah noted that the curve of the outbreak seemed to be flattening and he hoped the number would continue to be minimal as success would only be achieved with the collaboration and sacrifices of everyone.

“I hope everyone will continue to do their part in combating Covid-19 and I hope the spirit will continue as we move on towards the end of the conditional movement control order (CMCO) on June 9,” he said.

On worries among some working people who were told by their employers to stay late for the closing of business premises after the allowed operating hours from 7am to 10pm, Uggah said the police would understand the situation.

“The 7am to 10pm time period is meant for operating hours of businesses. As stated so, it would not be proper for the premises to chase the customers out before the end of operating hours.

“This means the workers have to leave past 10pm and the police will understand this, but we hope the workers would not use this as an excuse to linger until 12am,” he elaborated.

When asked on the findings of the four task forces formed to assist SDMC to fight Covid-19, Uggah explained that the task forces were currently in the midst of preparing a report.

“We are now setting a time frame and within this week, they will submit the report to us because one of the task forces is in charge of contact tracing while the other three are very much assisting our capacity to handle this crisis and make a recommendation for us on the way forward in case a second wave of Covid-19 is coming.

“I cannot give you the outcome of the report today but we will announce it in the near future,” he said.

Food aid given out in Jemoreng