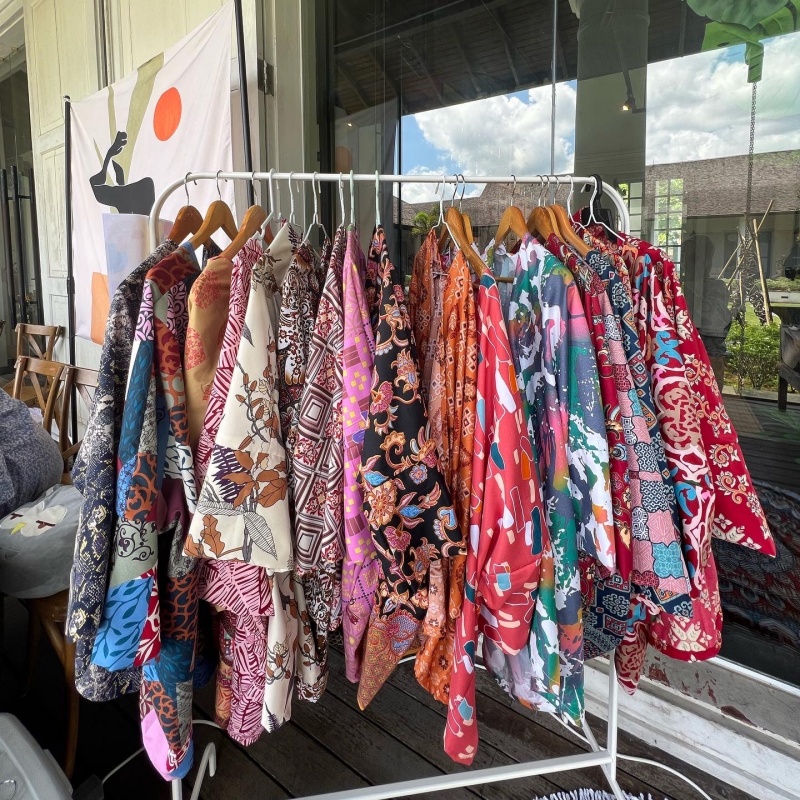 Batik with a contemporary twist

For each piece she sews, she does it with the same passion that her late grandmother instilled in her. Siti Adeena Muneera Zakaria is working her way through each thread to introduce her love of the batik pattern to the younger generation.

More than just what our elders wear

Batik is fundamental to the identity of Malaysia. It embodies the country’s culture and tradition.

A popular adornment among older generations, young people have recently learned to appreciate batik by incorporating elements from the current era.

Batik was once known as the sarong worn by women. It is now adorned with the most recent trendy styles.

With this in mind, batik fashion designer Siti Adeena Muneera Zakaria, better known as Muneera, wants to show the younger generation that batik is more than just what our elders wear. 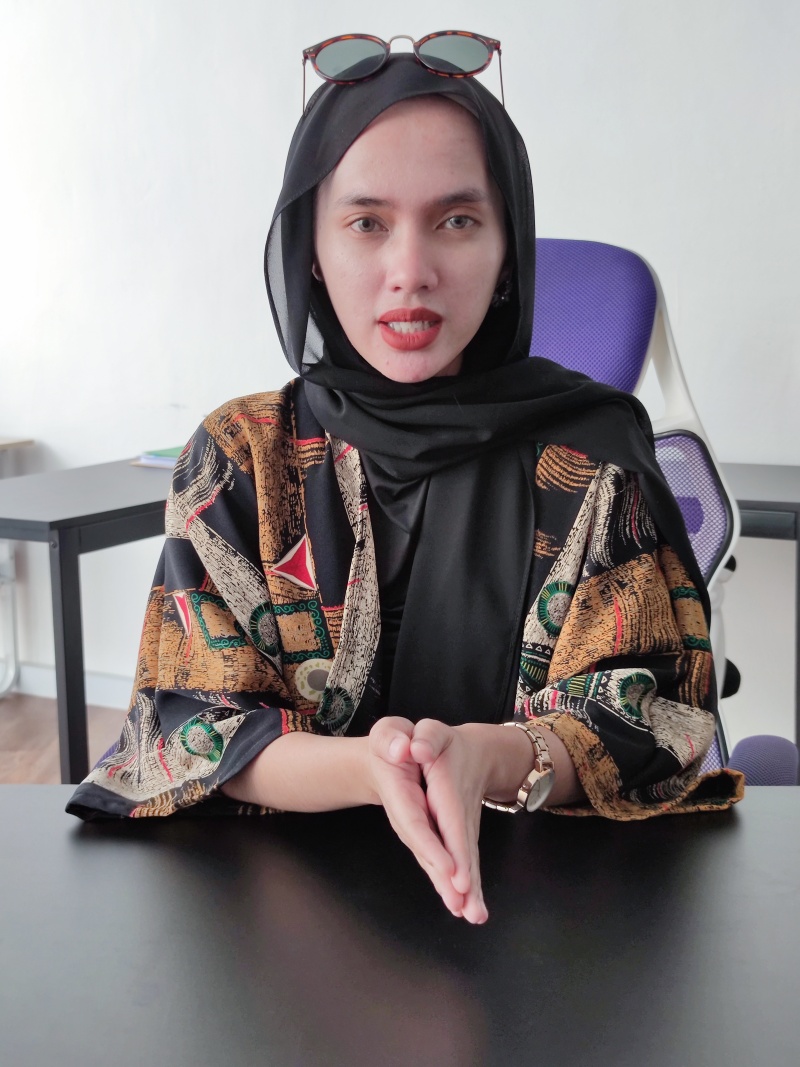 “I thought that since I am young, why not introduce batik to the younger generation in a way that shows that batik is not just for the older adults?” said Muneera.

Muneera’s interest in batik stems from her late grandmother, who was from Jawa, Indonesia.

The 27-year-old said that in addition to inspiring her love of batik, her grandmother also sparked her interest in the world of fashion. 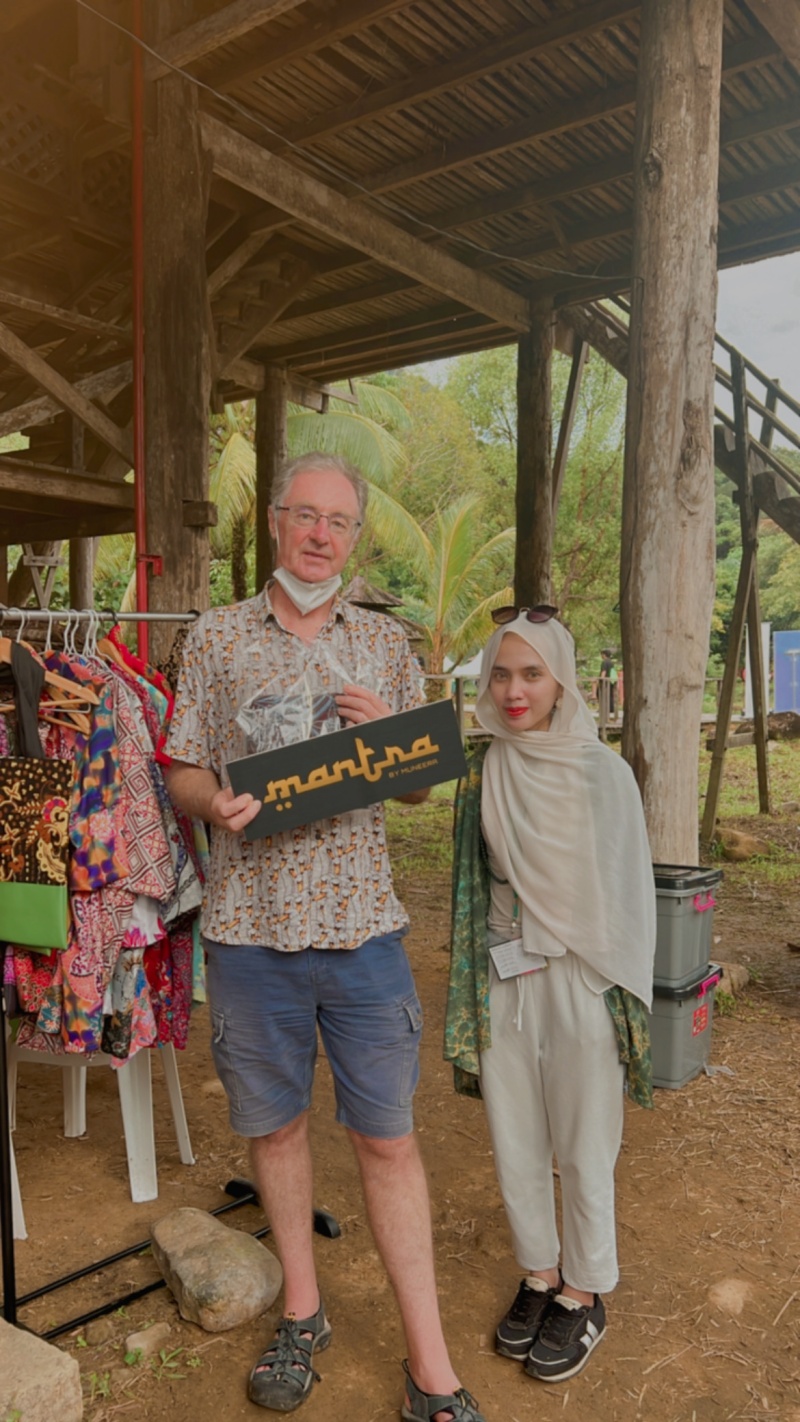 Muneera sells her product at the recent RWMF.

“As a child, I distinctly recall my grandmother’s love of sewing. She does it as a hobby, working on her old sewing machine. She would make us a tampung seribu (patchwork) blanket out of batik.”

As a young girl, the fashion designer observed her grandmother working at the sewing machine and was inspired to follow in her footsteps.

“I was the only one to avidly continue sewing after she did,” Muneera said, adding that she has been sewing since she was young, though not seriously.

In 2016, she realised she couldn’t find a tailor who could meet her expectations. Muneera’s mother then suggested that her daughter sew her own clothes.

“So, I did. I began sewing for myself. My cousins and friends eventually became interested in the clothes I made. Many people had requested that I sell them. So, I began making ‘kurung Kedah’ tops for my cousins.”

Muneera, who started her business in 2017 and registered it in 2018, never imagined that designing and sewing clothes would become her full-time job.

The designer also incorporates batik into custom-made pieces for her customers and sells ready-to-wear clothing.

She would sometimes spend months preparing a bridal outfit for her clients’ special occasions. 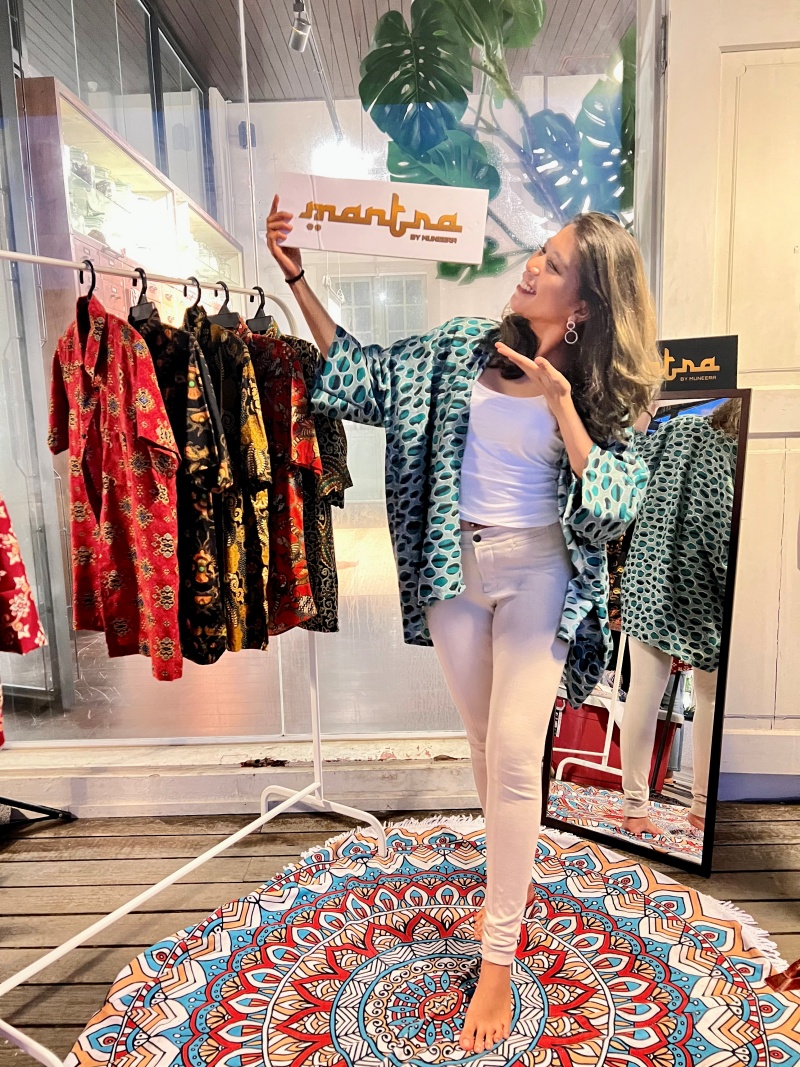 Mantra’s oversize outerwear is donned by a customer.

Named after her late grandfather, Mantrang Sindu, Muneera’s brand, Mantra, continued for about half a decade before she realised she needed to introduce a product that was versatile in terms of sizes and designs.

“I recently participated in a number of events to sell my apparels. Many tourists stopped by my booth and asked whether I sold outerwear. They find it simple to wear.”

Unbeknownst to her, she had designed her latest best-seller, the Mantra’s oversize outerwear.

Muneera revealed that it was a hit during this year’s Rainforest World Music Festival (RWMF) held at Sarawak Cultural Village. Because they were free size, they could be worn by people of all sizes.

“Initially, it was designed for women to wear with their everyday outfits. However, on the first day of RWMF, my friend who was manning my booth in my absence had sold my outerwear to a man. He asked if he could wear it, and she said yes.”

Muneera added that she was surprised that a man could look good in the outerwear as well.

Her oversized outerwear craze did not end with RWMF, as she recently introduced it at the Seni Kita event, which was organised by HAUS KCH.

Sold out in just two days, Muneera revealed that these batik printed designs were exclusive.

“I only made one outerwear from each pattern, so it is unique unless people request that the same design be repeated.”

She plans to introduce plain colours to her oversize outerwear in the future for those who prefer a simple and minimalistic piece.

Muneera will take part in the What About Kuching (WAK) 2022 under the programme Yarn, Wild and Free workshop.

Her tampung seribu was inspired by her late grandmother

Her pillar of strength

Though the road to bringing Mantra forward can be exhausting on some days as she works in her studio sewing her next best, Muneera’s commitment to it does not waver.

The second of four siblings, she credits her family and friends for their love and support for her passion.

“They are my main supporters. If I ever considered giving up, I would think of those who never stop believing in me.”

Aiming to showcase her collections on the runway, Muneera hopes for a fashion show for her brand label Mantra in the near future.

Her passion will shine through in the pieces she creates as she works towards her dream.

Incorporating her passion for batik into each of her handmade creations.

Her tampung seribu was inspired by her late grandmother