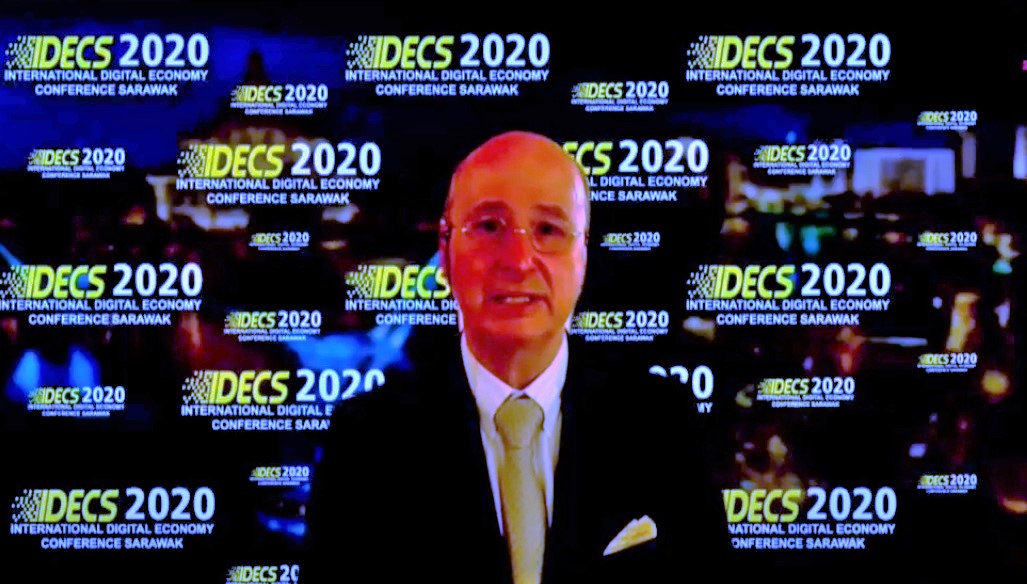 Be ready for the challenges

KUCHING: As Sarawak moves towards a digital economy, it must be ready to face  challenges and unsolved issues which come with it.

This was pointed out by Emeritus Professor of World Competitiveness at Institute of Management Development (IMD) Lausanne, Professor Stephane Garelli when he delivered his keynote presentation on ‘The Changing Global Economic Landscape & Sarawak Transformation in the Post Covid-19 Environment’ virtually at the International Digital Economy Conference Sarawak (IDECS) 2020 held at Borneo Convention Centre Kuching (BCCK) here on Wednesday (Oct 7).

“You name it digital economy but then, we must not forget that there is always a physical product.

“For instance, you can’t email a pizza or any other physical product as an attachment in the email,” he said.

Garelli added that technology was a very big consumer of energy.

“We are looking at processing power, storage power and delivery power which consume a lot of energy.

“Even self driving cars are consuming 20 percent more energy than the traditional ones.

“Digital economy is causing four percent of the world’s emission of carbon dioxide (CO2), while aviation is only causing 2.4 percent,” he revealed.

Garelli also said that although the use of technology would create employment, it would also change  jobs.

He explained that in the future, there was a high possibility of men encountering situations where they would be attended to by robots or  robots eventually replacing all of their jobs.

“At present, Amazon has 800,000 employees and 200,000 robots on average. Additionally, this means technology will create a world of robots,” he said.

Another unsolved issue of technology that Garelli highlighted  was the size of  technological companies.

He also brought up the question of whether   the people would move into a ‘black hole economy’.

He said in the centre of the  ‘black hole economy’ , there would be an entity  with a lot of technology, money and innovation.

“There will be smaller companies  around it. And then, there might be a system where everything is absorbed into the centre. This is a big risk for many nations, especially  emerging nations.

“Can small companies grow big? Or are they going to be voted out by the big companies immediately before they become competitors?” he asked.

Similarly, Garelli said that there was a possibility of a black hole in finance, too, with technology, money and all investors  going to the same company.

“As a result, there will be ‘over capitalisation’ of the same companies.”

Nevertheless, he said Sarawak and Malaysia in general, were playing a good card,  especially by moving forward into the Fourth Industrial Revolution (IR4.0) as a neutral country and not be held hostages by big countries fighting  each other.

“For instance, it’s a bit risky because you find yourself as a hostage  between two large nations – United States and China. They have the tendency today to ask everybody to take sides and companies do not like that as they prefer to be neutral.

“In Switzerland, it is very disturbing because we have a good relationship with everybody and now, they want us to pick sides. We do not want to do that. It should be a peaceful world,” he said.

On the relevancy of competition amidst Covid-19 crisis, Garelli believed that the economy was not defined only by looking at the Gross Domestic Product (GDP) or inflation.

“You have to look at the value system, education, technology as well as the use of infrastructure with all the logistics.

“I think the companies which are surviving very well are those with a strong value system;   they stick together and  make sacrifices together since they have to survive the situations together.

“Meanwhile, companies which are fighting inside won’t go anywhere.”

Garelli also pointed out that countries which were handling  the economic crisis very well were those where the people were united.

He added countries which had problems were  those where the people were fighting.

“They don’t agree with the rules and they are questioning every single thing that the government is doing,” he added.