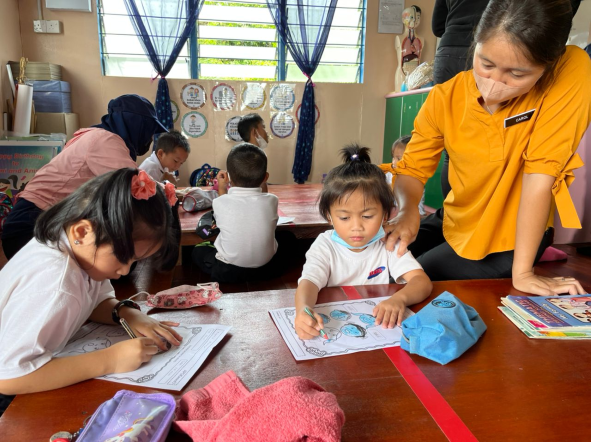 FOR nine years, preschool children at Rumah Panjang Jarit in Matu district in central Sarawak, were studying in a makeshift classroom at the Ruai of their longhouse.

The Iban longhouse, located along the treacherous Batang Igan river, was not equipped with proper kindergarten and other basic facilities and amenities such as clean water supply, road, school and community hall. Electricity supply was connected via underwater cable to the longhouse only recently.

Despite the lack of facilities and amenities, young parents at the longhouse were determined to educate their children. A small space was allocated at the Ruai of the 15-door longhouse for makeshift kindergarten classroom. “For nine years, the children had to study at the longhouse Ruai. The environment there was not conducive nor suitable for learning. It was very challenging to teach them because they could not focus as it was not a proper classroom,” said the kindergarten teacher Puan Dadra Janes, 38.

There was also no teacher’s quarters at the village for Puan Dadra to stay. In the past 11 years, she had to commute daily to Rumah Panjang Jarit from her house in Mukah which is about 3 hours by road with one ferry crossing and 30 minutes boat ride. “It is very challenging to come here. I have to put my life on the line for the sake of these children. Few years back, the boat that ferried me here almost capsized due to strong wind and turbulence waters. It was a miracle that I survived. On that day, I said to myself that it will be last time I will be come to work in this village. But for the sake of the children here, I decided to continue teaching at this longhouse,” she said.

At Rumah Gangga, also in Matu district, the children were also studying in a makeshift classroom for seven years before a new kindergarten was built by Petronas there. “The previous makeshift classroom was very small. It was just a small hut…without attached toilet and kitchen. The children had to eat on the floor of the classroom. The condition was really poor, and it makes it really tough for teaching and learning,” said teacher Shahida Marishamsudin, 33.

The deplorable condition of the makeshift kindergartens at Rumah Jarit and other villages in Matu caught the attention Jemoreng assemblyman (now Deputy Minister in the Premier’s Department) Datuk Dr Juanda Jaya who promptly approached Petronas for help in 2018.

The brand new and proper school building has given new impetus for the teachers and students work and study. “Since the completion of the new kindergarten, I am most enthusiastic and happy to come work every day… to impart knowledge and skills to the children of this longhouse,” Puan Dadra said.

Analisa Mateng, 29, whose child studies at the new kindergarten at Rumah Panjang Jarit said she was grateful to Petronas for funding the new school building. “I can’t thank Petronas enough for their initiatives and effort to make sure the children in the longhouse have a proper learning environment. If it wasn’t for Petronas, they would still be studying in the Ruai,” she said.

Rumah Panjang Jarit chief Encik Jarit Mering said the new school building has provided a conducive space for teaching and learning. “Before the new kindergarten was built, I truly sympathised with Cikgu Dadra and her students. The circumstances were very challenging for her and her students then,” he said.

Penghulu Jemoreng Hulu and Hilir Encik Mesalah @Che Jeni bin Shahdan, 69, said the Petronas-sponsored kindergartens project in Matu has provided access to early education to the children in the district. “This is a very strategic and noble efforts by Petronas. The new school buildings have provided the students a much conducive learning environment,” he said, adding that most of the old kindergartens were having structural issues and leaking roof.

“As a penghulu I would like to thank PETRONAS for building a comfortable and wonderful space for the students. With better facilities, I hope more children from this district will excel in their studies and have a better future,” he added.

Matu district is situated in the low-lying coastal region of Sarawak. It takes about 5-hour journey by road with two ferry crossings to reach the district from Sibu town. According to the Assistant Administrative Officer at Matu District Office Puan Noorkasmawati Kassim, the main economic activity in the district is farming and fishing. “Most of the people here are farmers and fishermen,” she said.

But with a better school facilities and major economic projects to be implemented in the district soon, the people of Matu are poise for brighter days ahead.