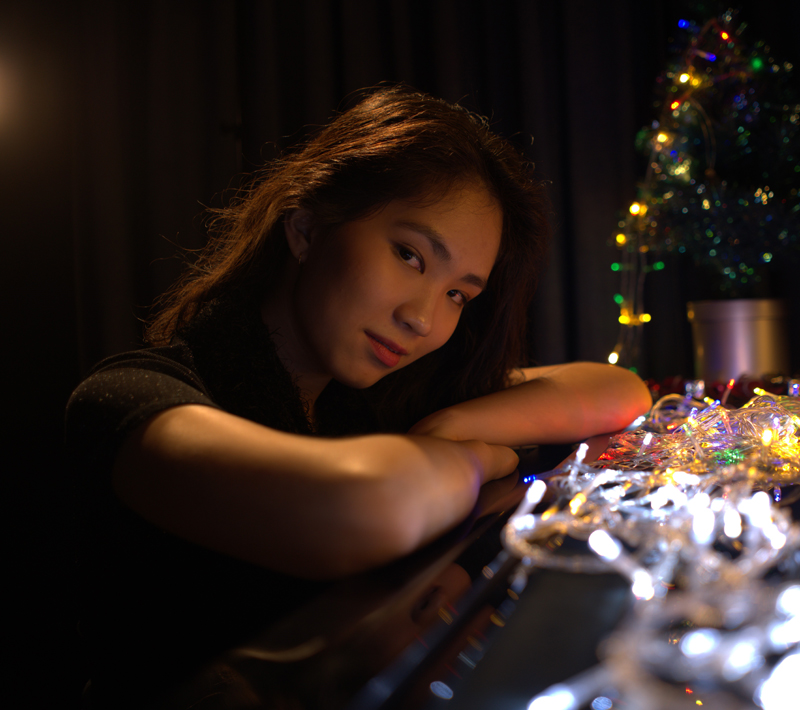 Belle Sisoski, a multi-instrumentalist, has many under her belt. Having played different musical instruments, the 16-year-old has amassed over 4 million views on TikTok. The young artiste will be performing in the Rainforest World Music Festival virtual live concert this weekend.

Belle Sisoski has always been drawn to music since she was a child. Belle recalled her mother’s stories about how she has always loved banging the piano keys, even as a baby.

“She would carry me over to the piano, where I would passionately bang on it,” said the 16-year-old.

Growing up amidst the tunes and melodies, Belle was introduced to music by her mother, a music teacher.

“Mum supports me in whatever way she can. She often encourages me that if I want to pursue anything, I should simply go ahead and do it. I am very grateful to her.”

When Belle was five years old, she had her first piano lesson.

“At the age of seven, I began learning the violin.”

Her mother had instilled a musical environment in her in many ways. Belle has developed her talents on other instruments in addition to lessons.

“As I grew older, I developed an interest in various musical instruments. Mum bought all of these for me. A sape, a violin, the traditional Chinese instrument guzheng, bass guitar and others.”

And it was her mother’s and her own efforts that shaped Belle into the woman she is today. Belle has composed several unpublished originals as a musician, singer-songwriter, and music producer, and her music has been signed under Universal Music Malaysia. Belle wrote the song ‘We Are Malaysia’ on Malaysia Day when she was 13 years old. Her most recent accomplishments include accumulating over 4 million views per video on TikTok (@bellesisoski).

Belle also revealed that she will play at the Rainforest World Music Festival (RMWF) 2022, which will be held this weekend (June 17 to June 19).

“I’ll be performing at the festival’s virtual concert. My performance will comprise the sape, guzheng, rainmaker, Japanese bell, violin, keys, and drum pads, as well as my vocals.”

The abstract of Belle

As a multi-instrumentalist, Belle is proud of her ability to seamlessly blend different music elements. Classically trained, Belle went on to say that she focuses on fusing ethnic instruments with today’s pop music. The passionate artiste composes expressions from her 16-year journey on earth. Her songs have a lot of abstract qualities to them. With all the strings strummed, Belle’s music expresses her personality.

Belle went on to say that she was inspired by a number of artistes that she adored.

“One of them is Aurora. She is very unique because, as a Norwegian, she blends the tones and textures of her heritage with pop music. Another singer is Chloe Flower. She combines pop and classical music in her work.”

Belle, who is musically inclined, said that music comes naturally to her.

“When I’m making music, I’m taken to another world.”

However, as a producer, she will occasionally experience a creative block.

“I’ll just block every music I hear. I’m going to take a break from listening for a few hours, and then I’ll return with fresh ears. Because my originals are more personal to me, I generally encounter creativity block when composing them. This is also due to the fact that I express more of my feelings there.”

Aside from that, Belle faces other difficulties when it comes to composing her own piece.

“The lyrics are particularly difficult for me since I want to deliver a meaningful song.”

When it comes to producing a cover, Belle says her problem is overcrowding the song by incorporating many different elements.

“That is something I have a bad habit of doing, but it doesn’t always work. I simply need to relax and stop trying so hard,” she said.

Ever since the internet took over people’s lives around the world, many have become reliant on its amazing capabilities in assisting with daily routines. Social networking platforms are one of the ways the internet has aided us. Within seconds of publishing, the tool can help us reach a larger audience.

When it comes to the use of social media, Belle believes it has helped generation Z connect.

“Apart from that, it helped in the transformation of traditional family values and a toxic workplace culture.”

To her, the internet becomes a place for people who are stressed and undervalued to express themselves.

“It has a psychological impact on them. That’s when social media steps in to become a platform for us to air our grievances. It also raises awareness among peers.”

As a musician, Belle believes that social media has aided artistes all over the world in getting their voices heard.

“This is especially evident in the aftermath of the pandemic, as many virtual concerts have been held. It is a much more popular way today because it allows people from all around the world to have easy access. Artistes will have the ability to expand their audience.”

The future of Belle

Belle has made plans for her future as she prepares for the Sijil Pelajaran Malaysia (SPM).

“Hopefully, I’ll be able to get a scholarship to a good music university. I aim to attend Berklee College of Music in the United States to study more about music production, modern art and music, and to broaden my horizons in general.”

Belle is considering pursuing a career in music in the future, and she aims to use her skills to become an all-rounder in the field.

“I want to be an artist, a producer, a film scorer, and a teacher,” said the musician, who often assists her mother in teaching music to students.

While Belle has many years ahead of her and plans to succeed, the musician and her dreams will continue to inspire many people with her passion for music today. One note at a time, the virtuoso never forgets to add that extra wow to her music.