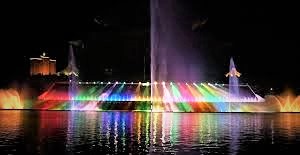 KUCHING: Local residents and tourists are giving the thumbs-up to the Darul Hana Musical Fountain at Kuching Waterfront.

The fountain was launched on October 14, 2018 in conjunction with the 82nd birthday celebration of His Excellency the Governor of Sarawak. It features a flashy display of water performances accompanied by a neon light show and music lasting 15 minutes at a time.

Kamarul Zaman, 28, an entrepreneur, said with the new attraction here, the city centre was not so dull anymore.

“The new Darul Hana Bridge and the awe-inspiring musical fountain show how much Sarawak has progressed,” he said.

A young traveller, Faris, 24, from Kelantan said he was surprised by the going ons at Kuching Waterfront.

“I really like the musical fountain. It shows a hint of Sarawak culture with its catchy tune. The view from the bridge is also amazing and it’s the best place to view the fountain,” he said.

Zihan, 23, an employee at a kiosk at the waterfront, said the new bridge and fountain attracted a lot of people, especially during weekends.

“I think it is a positive development. It has been awhile since the city centre was packed with people. With new attractions like the floating mosque, business is booming here,” he said.

Maria, 21, co-worker of Zihan, said that even on weekdays, people were coming to the waterfront.

“Before the musical fountain and the bridge, it was quiet on weekdays.  Now, we have visitors coming here at night just to see the attractions here,” she said.

Abang Mohd Zaim, 25, a chef, said that the night stroll along the Darul Hana Bridge was quite fascinating.

“I have yet to see the musical fountain, as it is usually crowded but on social media, it is quite impressive,” he said.

Attia Zulaika, 28, an employee of a retail shop, said it was best to take selfies or group photos for memories at the waterfront attractions.

“A lot of Kuchingites are taking photos here. It is weird to be left out.

“For me, the new attractions here have really transformed the Kuching Waterfront and made it lively,” she said.

Mohd Syham, 22, a uniformed personnel from Serian, said the musical fountain was something exclusive here in Kuching.

“Seeing it up close, I am proud that Sarawak is developing and progressing well. The new attractions are splendid,” he said.