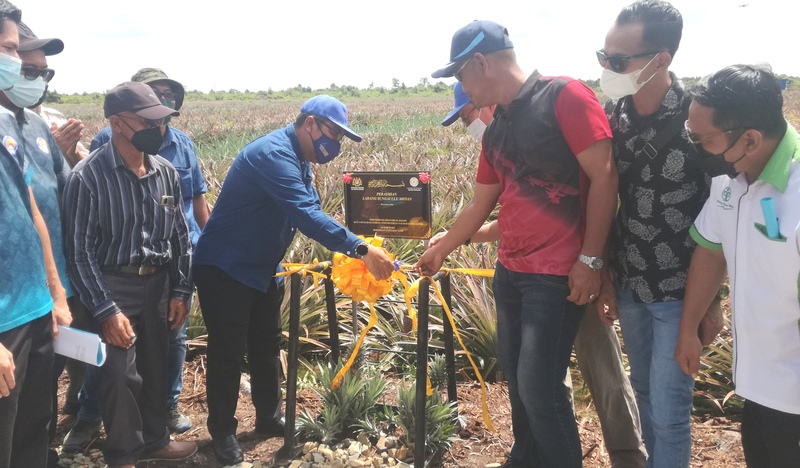 SAMARAHAN: Sarawak is likely to overtake Johor as the largest pineapple producing state in the country by the end of the 12th Malaysia Plan (12MP).

Currently Sarawak as second to Johor has a pineapple plantation area of 9,782 hectares and can produce 181,000 matrix tonnes of pineapple every year, according to Mohd Khairuzamri M Salleh, director-general of the Malaysian Pineapple Industry Board (MPIB).

As of now, a total of 700 to 900 farmers are into pineapple cultivation in the state since the 11MP with most of them in the Samarahan Division.

“I believe by the end of the 12MP, Sarawak may pass Johor to become the largest producer (of pineapple) in Malaysia,” he said after officiating at Sungai Ulu Moyan Farm, Asajaya here yesterday (March 23).

Khairuzamri added that this was because Sarawak had huge resources to further increase pineapple cultivation and the dynamic movement of its cultivation, including in clusters such as at Ladang Sungai Ulu Moyan, Asajaya.

He pointed out that about 60 hectares of the plantation had been cultivated with pineapple and there was a potential of more than 300 hectares to be developed.

“This group has managed the farm very well and applied the technology that we have delivered through MPIB in this area,” he said.

He also said that this would enable the farm to have the recommended high density of between 14,000 to 17,000 pineapples per hectare and there are various varieties of pineapples including N.36, Moris and MD2.

Khairuzamri further said that the price of N.36 pineapples could reach RM6 each and as a result he targeted for Sarawak to export its pineapples to Brunei, Japan, and China.

“In the 12MP, we aim for all pineapple entrepreneurs to achieve an income of up to RM8,000 a month,” he said.

In this regard, he called on the people of Sarawak, especially those aged 40 and below to venture into the pineapple business by taking advantage of various assistance and schemes offered by the government.

Editor
View All Posts by Author