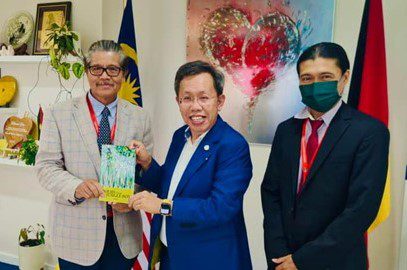 KUCHING: English must be utilised as a medium of communication and language of knowledge.

In stressing this, Bintulu Port Holdings Bhd (BPHB) group chief executive officer Datuk Mohammad Medan Abdullah said the use of the language must be appreciated.

He said this when handing over his book – a collection of poems – titled ‘Poems from the Jungle Boy’ to Deputy Premier Datuk Seri Dr Sim Kui Hian, who is also Old Josephians Association president.

Medan presented 20 copies of his book to be placed in the library at St Joseph Secondary school for the benefit of the students during a courtesy call to Dr Sim today.

The meeting was to brief and update the Deputy Premier on the activities of Bintulu Port, which is operated by Bintulu Port Sdn Bhd, a company which the Sarawak Government and Petroliam Nasional Berhad (PETRONAS) has 70 percent stake between them.

Commenting on his book, Medan who is a Kelabit, said with the poems written mainly English as well as a few in Bahasa Melayu, it proves that it is possible for locals to write books and to compose poems in English, which is not their mother tongue.

One of the poems entitled ‘Two Paths’ has attracted international attention in China and has been translated into Classical Chinese and adopted as a corporate poem by a Chinese company.