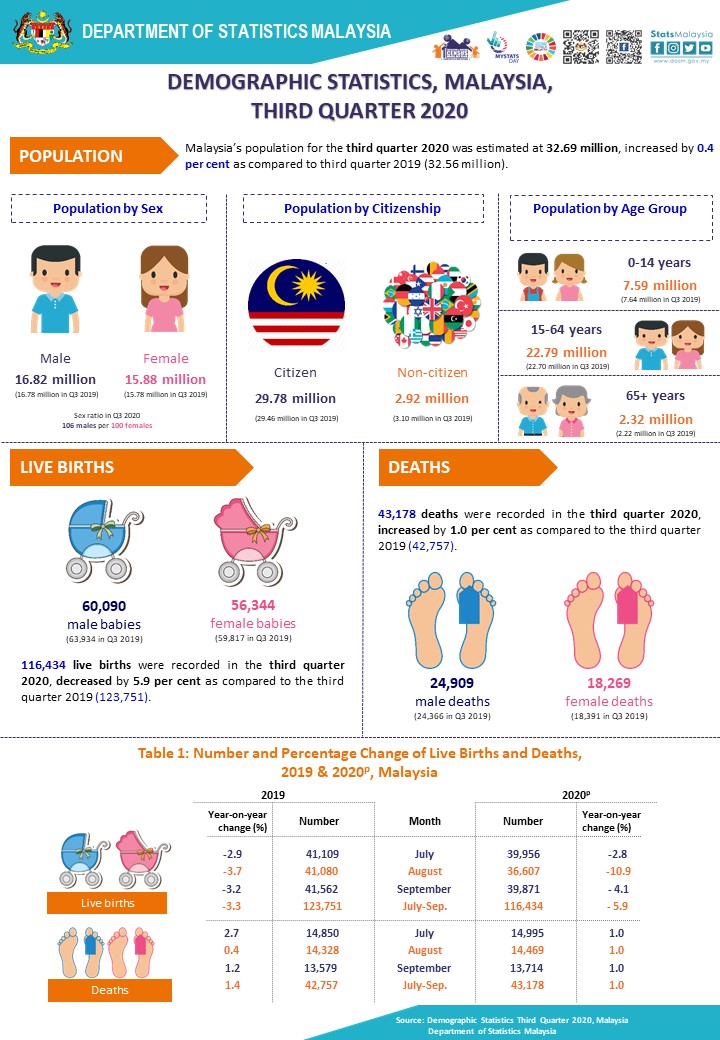 Births down in Q3

Commenting on the report, Chief Statistician Malaysia, Datuk Seri Dr Mohd Uzir Mahidin said based on the recent population registration, Malaysia’s population in the third quarter of this year stood at 32.69 million compared to 32.56 million for the same corresponding period last year.

Dr Mohd Uzir said three states recorded the highest population composition in the third quarter of this year, namely Selangor at 20 percent, followed by Sabah at 12 percent and Johor at 11.6 percent.

“During the same period, Selangor recorded the highest number of deaths with 6,816 deaths while W.P. Putrajaya recorded the lowest with only 57 deaths,” he said.

The composition of population aged 15-64 years old (working age) increased to 22.79 million in the third quarter of this year .from 22.70 million in the same corresponding period last year.

Dr Mohd Uzir said the composition of population aged 65 years and over (old-age) increased to 2.32 million this year from 2.22 million for the same corresponding period last year.

“This trend is in line with other developed countries that are heading towards the ageing population,” he said.

Dr. Mohd Uzir, who is also the Census Commissioner, added that the Population and Housing Census of Malaysia 2020 (MyCensus 2020) was being implemented in two phases with the theme ‘Your Data is Our Future’ (Data Anda Masa Depan Kita).

The first phase is carried out online (e-Census) from July 7 to Dec 21 this year while the second phase from Jan 20 to Feb 6 next year through face-to-face interview.

“People are advised to complete the e-Census before the deadline. Otherwise, the census enumerator will visit their living quarters from Jan 20 to Feb 6 next year.

“The data collected through this MyCensus 2020 is very useful for socio demographic studies and other aspects such as for policy making and planning for monitoring of demographic trends and action programmes, as well as for research and scientific study of the interrelationship between fertility and mortality trends and socio economic development,” he added.

Further information on MyCensus 2020 can be obtained through the census portal at www.mycensus.gov.my.