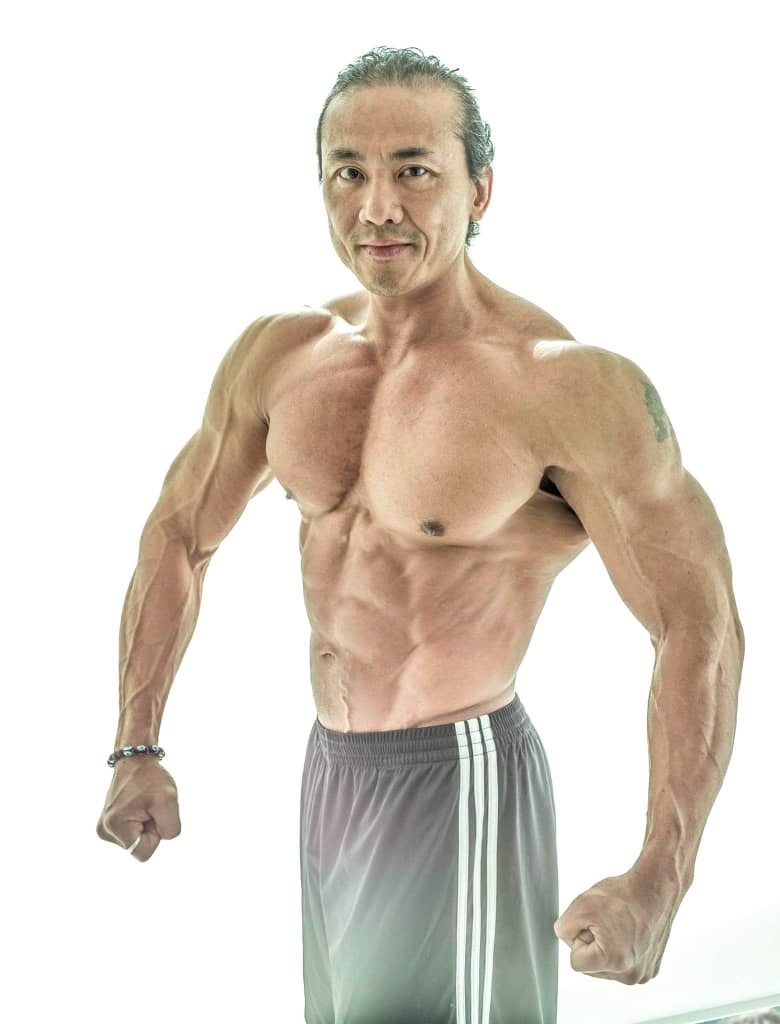 Age is never a reason to not exercise, and there has never been a maximum age limit to the gym. That being said, 55-year-old Nolan Chee is proof that no matter how old you are, keeping fit and building your body is certainly possible.

Age is never an excuse

born and raised in Kuching, 55-year-old Nolan Chee has been building his body up since he was at a young age. A believer is of the old saying “Your body is the greatest asset of all” the masculine man admits that he has always been active in sports.

According to him, his school years were spent being actively involved with swimming. He was also a member of the Kuching Amateur Swimming Association (Kasa) then.

It was only after completing secondary school that he ventured into bodybuilding. “I was inspired by Arnold Schwarzenegger after watching his movie Conan the Barbarian.”

The sportsman recalled his days as a beginner, “After eight months of training without a coach, I registered for my first competition. It was called Mr Kuching Bodybuilding.” He finished second last in the competition.

In the same year, he furthered his studies in Seattle, USA and when he was done, he came back and continued his bodybuilding endeavours.

Decades ago, he remembered that gyms in Kuching were not as technologically-advanced as the current. “The first gym I attended was HUT in Jalan Haji Taha.” Nolan disclosed that the gym was opened by the late Bujang Taha, “he was Mr Universe during his era.”

He added that HUT was not the fanciest gym with the hi-tech equipment, “The equipment consisted rusty irons and train wheels that are actual locomotive iron wheels!”.

Nolan recollected using barbells, benches made out of woods and machines armed with welded pipes, heavy-duty cables and pulleys, “Actually, there were more wooden structures to hold up the so-called workout machines,” he laughed.

Nonetheless, being in the industry for as long as he can remember, Nolan, believe it doesn’t really matter which gym a person visits. “What’s most important is your attitude towards achieving your goals.” Currently, he trains at home with limited equipment, but admits he still can have an awesome workout every time and had made good progress with them.”

He would also train with his wife who pratices meditation and yoga. “At times I would join her during her sessions at home.” According to Nolan, his wife, Margarita Naming is his manager in life. “She had a lot to do with my success in bodybuilding and my fitness endeavours. Through thick and thin, we managed to save enough money for all my overseas competition and they don’t come cheap.”

Nolan started fitness training three years ago as he reevaluates his health, “I slowed down a bit as bodybuilding had started to take its toll on me.” But it did not bog him completely as he still manages to compete internationally.

Learning through experience, Nolan disclosed that doing deep meditations and yoga can enhance one’s health aside from lifting weights, jogging and others. Good eating habits is also important.

He advises fellow fitness junkie to avoid starchy carbohydrates, canned foods, instant noodles and fast foods as they are the main contributors to obesity.

“Instead, eat plenty of vegetables, fish and a moderate amount of red meat,” said Nolan.

Lastly, Nolan strictly warn to never use age as an excuse to not want to keep fit, “Mostly I have heard people would say that they are too old or have no time to exercise. These are the laziest excuses I have heard.”

The sportsman said having the right attitude is essential. “Whether you want to do it or not is your choice. As far as health is concerned, you better spend your money on healthy food instead of spending it on hospital bills or medicines.”

“My motto in life has always been to keep myself healthy physically, mentally and spiritually.” His personal belief led him to be a God-serving Christian on top of an avid fitness junkie.

“I always believe that we are all given the ability by God to be better for ourselves.” His devoutness also contributed to his continuous motivation in his fitness journey.

Nolan then shared his final advice — “Trust God in all you do. He will guide you and walk you to a happier and better life.”

Apart from working out six days a week, Nolan trained his calves and abs on a daily basis.

Jumping onto the Signal bandwagon?