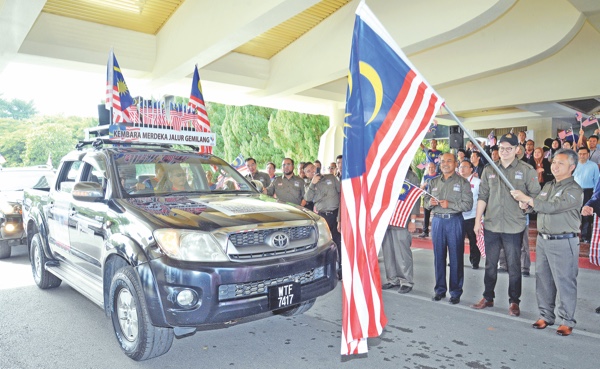 KUCHING: The build-up to the National Month celebrations is underway, kicking off with the Kibar Jalur Gemilang Campaign 2019 and Kembara Merdeka Jalur Gemilang (KMJG) convoy.

The programme is an annual activity organised by the Malaysia Information Department (JaPen) which aims to encourage more people and various agencies to wave the Jalur Gemilang whether it be on their vehicles or at homes, government buildings and business premises during the entire National Month.

“This is a good programme to boost the patriotic spirit of the Malaysian community, and especially the Sarawak community.

“We must demonstrate unity and wave the Jalur Gemilang proudly as we are one country,” Snowdan told reporters.

In addition, he shared his hope that youths nurture their patriotism as well through education.

“It must be ensured that they know about Malaysian history. It is important that they learn not just Semenanjung Malaysia’s history, but also that of Sarawak.

“Whether it is Malaysia Day or Sarawak Day, we have to have respect,” he stated, urging for the public to
continue with this spirit.

Aside from this, the Kibar Jalur Gemilang Campaign 2019 would also be held in 33 districts all over Sarawak until Sept 19.

On a separate note at the same event, speaking of the group of 16 Iban, Bidayuh and Melanau “kuntau” masters and practitioners who will be participating in the 19th Chungju World Martial Arts Festival 2019 and the 2nd World Martial Arts Masterships 2019 in South Korea, Snowdan described this effort as a good challenge for the individuals from the Sarawak Dayak Martial Art Association.

“We are proud of their achievements, and of course we from the Ministry of Youth and Sports fully support them as they can showcase their talents,” he told reporters.

Snowdan elaborated that if they only competed in Sarawak or Malaysia and not overseas, they would not be able to gauge themselves on an
international platform.

“They would now know how far their talents go.

“We can help with furthering their progress in terms of sporting skills with training, coaching, and forming improved teams to match the international standard,” he stated.

Businesses will thrive in Samarahan

A boon to rural development

The Oath of Secrecy

Businesses will thrive in Samarahan