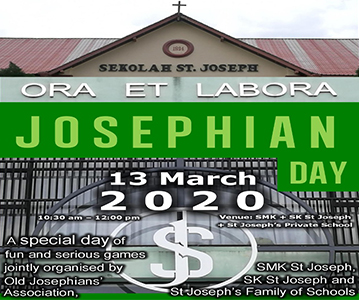 The one-day event, organised by Old Josephians’ Association (OJA), will see fun and exciting games which will take place on March 13 from 10.30am to 12pm on the grounds of SMK St Joseph and St Joseph’s Private School.

In a press release yesterday, it said it was a great opportunity for students from various backgrounds to mingle with each other.

On top of that, the association’s alumni will also take part in the event.

Another notable ex-Josephian who will be attending is Roman Catholic Archbishop of Kuching, His Grace Simon Poh — he will lead the opening prayer on that day.

According to the press statement, there will be interactive games run by students from the different St Joseph schools.

A performance corner has also been set up where students can showcase their various talents.

There will also be a series of friendly competitions whereby OJA members will compete with current students in the “Back to School Games” event which includes badminton, ping pong, basketball and futsal.

“We’ll see who wins — older Josephians or younger ones,” it said.

There will be at least 10 food trucks selling various food and beverages. On top of that, there will also be a book and stationery exhibition from two bookstores.

It also hoped that this first-ever Josephian Day can be a first of many in the years to come.