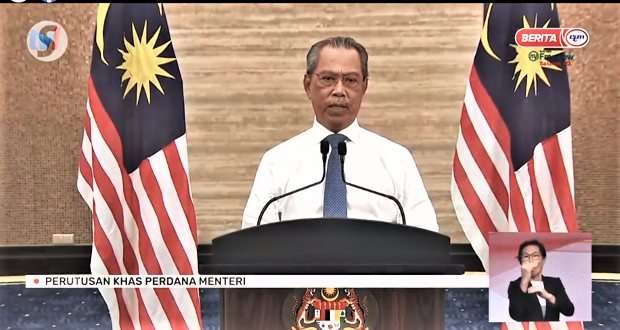 In his special address on the implementation of MCO which was broadcast live on television this afternoon, he said the Ministry of Education would soon release the detailed SOPs.

“Although there are strict movement restrictions, especially in states imposed with the MCO, exemption is given to students and candidates for major examinations including SPM for the 2020 and 2021 sessions. They are allowed to attend schools with strict SOPs,” he said.

Meanwhile, for religious activities, the prime minister said in states imposed with the MCO, only committee members of mosques or houses of worship were allowed to attend the prayer sessions with a maximum of five people.

“State religious authorities are advised to provide the appropriate number of attendees allowed,” he said.

On leisure activities outside the house, Muhyiddin said, people were allowed to leave the house to exercise with household members only.

“Make sure you keep a distance of at least two metres from others at all times. If you wish to jog, do not do so in groups of more than two, and if cycling, do not do it in groups at all,” he said.

The prime minister said such activities were allowed as he was aware that being in isolation for a long period of time could put pressure on mental health. – Bernama