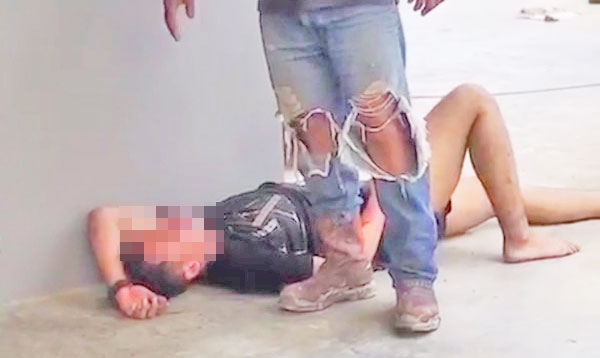 KUCHING: A burglar learnt a very painful lesson ̶  that crime does not pay ̶  after he was beaten up by an angry mob here.

Earlier, he and an accomplice were seen by residents trying to break into a house in Lorong Hup Kee at around 10am yesterday.

A cellphone footage, which has gone viral on social media, showed one of the suspects on the roof surrounded by residents below.

Members of the neighbourhood watch climbed up in an effort to apprehend the suspect but he acted aggressively.

He also waved what appeared to be a parang, or a tool used for breaking and entering, at one of the neighbourhood watch members.

A pole was later thrown onto the roof for the man to ward off an attack by the suspect.

In his haste to run away, the criminal slipped and fell down to the ground below as residents rushed in.

Police arrived to put the handcuffs on the badly bruised suspect, who was sent to the hospital for treatment.

His accomplice (in long pants), however, managed to escape capture and police are now hunting for him.

Earlier the house owner stated that he had been alerted by the security system installed in his house that was linked to his phone.

He then contacted his neighbours for assistance. The neighbourhood watch members came together and helped to apprehend the burglar.