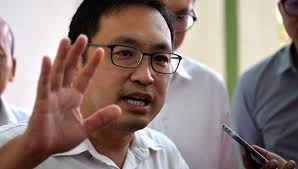 KUCHING: Sarawak Democratic Action Party (DAP) chairman Chong Chieng Jen has filed an appeal to overturn the decision of the Kuching High Court in respect of the Sarawak government and the State Financial Authority’s (SFA) ‘black hole’ defamation lawsuit brought against him.

He said that the appeal was filed on 12 September and the implication of the decision is far-reaching, especially in curtailing the freedom of speech an individual has in criticising the government.

“It has never been the law in any of the Commonwealth countries that a government can sue an individual for defamation which is also against any principle of law set before in Commonwealth system countries or even in United States of America’s (USA) legal system.

“This decision by the Kuching High Court has set a precedent and if an individual were to make a comment like saying that the government is useless, he or she will be liable for defamation,” he told the reporters during a press conference at the DAP Headquarters here today.

He added that the Kuching High Court’s decision will also have an impact on transparency and accountability of the government in the management of government’s business.

“If the rights of the people to criticise the government have been curtailed, then the extent of transparency and accountability of the government is lessened.

“Putting the amounts that have been awarded aside, as a matter of law principle, we believe that this is a wrong decision so we are appealing against the decision.

He added that a stay of execution has also been filed so that the damages and costs will not need to be paid until a final decision has been made by the Court of Appeal or even the Federal Court.

“I believe this case will go all the way up to the Federal Court because it is a big case and affects the progress of democracy,” he concluded.