KUCHING: Any claims from other parties including Parti Bumi Kenyalang (PBK) that Gabungan Parti Sarawak (GPS) is irresponsible and neglecting the needs of the people are baseless.

“The party only seeks to establish relevancy and to appease those who are constantly seeking to find weaknesses in the administration,” said Kapit MP Datuk Alexander Nanta Linggi.

Nanta pointed out that the party should not be worried by the unfounded criticisms as it is the one doing the work for the people. 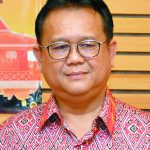 “We have achieved a lot ever since the party governed the state, particularly in terms of rural development and the focus on rural areas has become more prominent under the leadership of Chief Minister Datuk Patinggi Abang Johari Tun Openg,” he told reporters during his Raya visit to Tanjung Datu assemblywoman Datuk Amar Jamilah Anu at her residence, Damai Jaya in Santubong here last Sunday.

“The state has launched development agencies that adopt a bottom-up approach to the development of rural infrastructure and socio-economic activities.

“Kapit, for instance, is a large region which has benefitted from Upper Rajang Development Agency (URDA). With the agency in place and a budget of RM 1.5 billion, basic infrastructure projects such as roads are already underway and expected to be completed within two years.”

“Areas such as Baram and Bario have also benefitted through the Highland Development Agency (HDA) and so have other regions such as Limbang, Lawas, Sarikei, Sri Aman, Betong and Simanggang.

“This is a game-changer as before the inception of the development agencies, the planning was solely done by the state planning unit (SPU) which comprised government officials.

“The downside of this is that some of the infrastructure projects planned did not fulfil the needs of the people.”

The former Rural and Regional Development Deputy Minister also stressed that the focus on rural development was not only highlighted by the current Chief Minister but also by his predecessor Pehin Sri Adenan Satem during his brief tenure.

“There are no leaders from GPS who do not want to promote development in their areas and improve the livelihoods of the people. This is evident from the debates in the State Legislative Assembly (DUN) and activities carried out in the constituencies.”