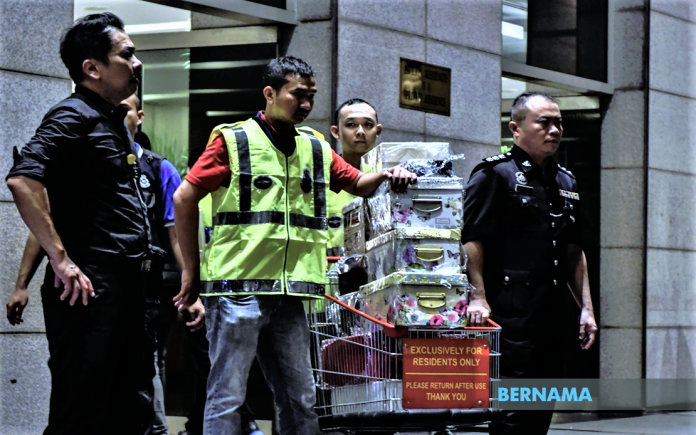 This followed the decision made by High Court judge Mohamed Zaini Mazlan today who ordered the prosecution to allow Najib and his family to physically inspect the items.

In his judgment, Justice Mohamed Zaini said Najib, his wife Datin Seri Rosmah Mansor and their daughter, Nooryana Najwa should be given the opportunity to inspect the confiscated items.

The judge also said that the respondent’s (prosecution) concern over the security aspect could easily be allayed by ensuring that the inspection is done in premises controlled by them with the necessary security measures.

“I am not able to fathom as to how the removal of these goods can resort in their deterioration. My primary consideration is to enable the applicants (Najib and his family) the opportunity to ventilate their defence in respect of the respondent’s forfeiture application.

“This can only be done if they (applicants) are given the right to inspect the goods seized. Based on the reasons that they have set up in support of their application, whether their defence is meritorious or otherwise is something that I will address when deciding upon the forfeiture application,” he said.

Justice Mohamed Zaini made the ruling with the conditions that the inspection be conducted in premises designated by the respondent and only the applicants be allowed to inspect the items under supervision by the respondent.

He also ordered that each applicant be accompanied by a solicitor.

“Another condition is that the inspection is only done once and that it be done within two weeks from today,” he said.

On July 18 last year, Najib filed a notice of motion to inspect and obtain particulars on the said assets.

In the notice of motion, Najib, 67, is seeking for the respondent to provide or supply colour pictures of the items, as well as their detailed descriptions, such as the label, symbol, gift card, package and box of the movable properties that were seized on May 17, 2018.

The former premier had filed the application on the grounds that parts of the boxes, handbags and containers that were seized had been removed from its original wrappings, and this has caused confusion in their identification process.

Rosmah, 69, and Nooryana Najwa, 32, meanwhile, filed an application for leave to be allowed to physically inspect the items. Among the items mentioned in both the notices are 315 handbags of various brands, 14 watches and 27 pairs of shoes of various brands, as well as cash in various currencies, including RM537,000, Pound Sterling 2,700, Sri Lanka Rupee 2,870,000, RM187,750 in old Ringgit Malaysia notes and 320,500 Pound Sterling. – Bernama

Sajat pleads not guilty to dressing up as woman