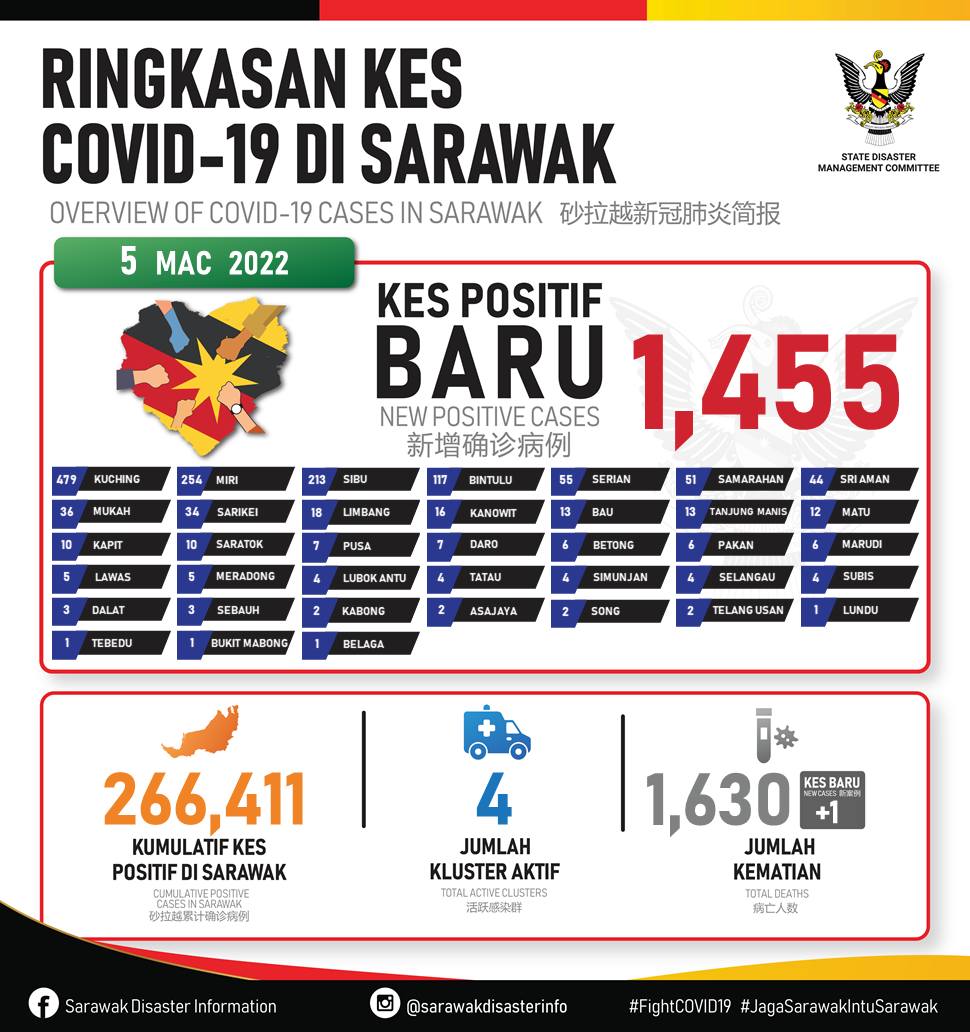 KUCHING: New Covid-19 cases in Sarawak have increased again with 1,455 cases recorded on Saturday, bringing the tally to 266,411.

“Of the total, most cases – 1,448 – are in Categories 1 and 2 with only seven cases in Categories 3, 4 and 5,” said Sarawak Disaster Management Committee (SDMC) in its daily update.

“Both Bau and Tanjung Manis each had 13 cases, 12 in Matu, 10 cases each in Kapit and Saratok and seven cases each in Pusa and Daro.

“Three districts, Betong, Pakan and Marudi each had six cases, Lawas and Meradong each recorded five cases while Lubok Antu, Tatau, Simunjan, Selangau and Subis each had four cases,” said the committee.

Three cases were recorded each in Dalat and Sebauh, two cases each in Kabong, Asajaya, Song and Telang Usan, and only one case each was recorded in Lundu, Tebedu, Bukit Mabong and Belaga.

The victim passed away in Kapit Hospital and had a background of high blood pressure and chronic kidney disease.

Apart from that, eight compounds were issued in Kuching for failing to register in a premises using the MySejahtera application and for not wearing face masks, bringing the total to 13,508 compounds.

Nine new persons have been placed under surveillance and 237 of them are in quarantine at designated hotels.

The total number of persons under surveillance who have been discharged from quarantine stands at 167,223.

KUCHING: Around 700 new students completed their studies at Politeknik Kuching Sarawak (PKS) for the first semester of the 2022/2023 session. PKS director Hikmatullah Hajid...

PUTRAJAYA: This parliamentary session saw a remarkable achievement when...

Connecting the deaf and hearing world

THE Sarawak Society for the Deaf (SSD) was established...

KUCHING: The Department of Veterinary Services Sarawak (DVS) has...

KUCHING: The expansion and upgrading of the multipurpose auditorium...

KUCHING: Miri teams defeated other schools in both the...

GEDONG: Some 200 beneficiaries from the Gedong constituency received...

KUCHING: Around 700 new students completed their studies at...

SIBU: The University of Technology Sarawak (UTS) has established...

LIMBANG: The ability to communicate in English opens doors...