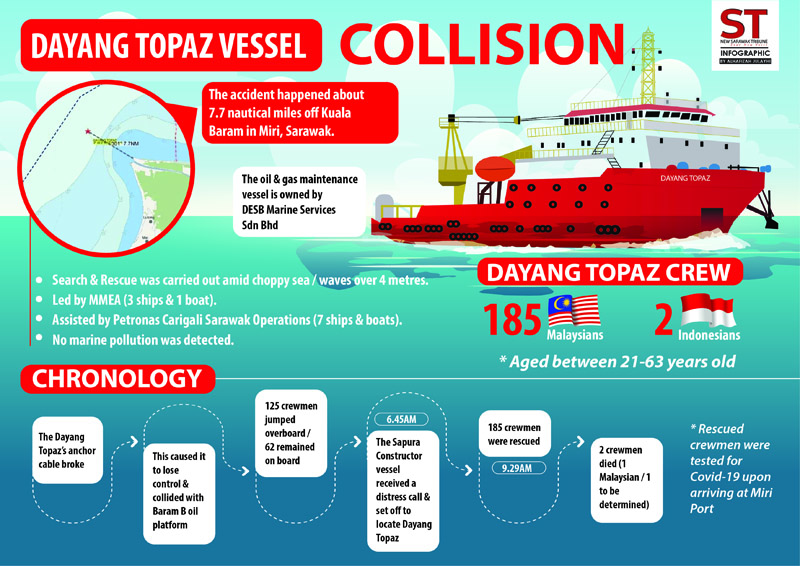 KUCHING: All surviving crew from Dayang Topaz, a vessel which hit an offshore oil platform in a maritime accident earlier today, will undergo Covid-19 screening.

According to  State Disaster Management Committee (SDMC) chairman Datuk Amar Douglas Uggah Embas, the move is a precautionary measure  to  prevent the spread of the virus in the state.

“We are saddened by what has happened. Thankfully, almost all of them were rescued.

“We have already instructed the Divisional Disaster Management Committee to take action to screen them  and then quarantine them,” he said when delivering the Covid-19 update on Tuesday (Oct 27).

Uggah added the committee had not yet been notified whether the crew members had been to Sabah or not.

“This is not to burden them. This is a precautionary measure taken by SDMC because almost 60 percent of Covid-19 cases in the state are imported cases.

“This is why we are stringent in guarding our borders,” he added.

According to reports, all survivors from Dayang Topaz arrived safely at Miri Port on Tuesday (Oct 27) afternoon after they were stranded out at sea following a maritime accident which resulted in the death of two crew members earlier that day.

The crew from the maintenance vessel, which hit an offshore oil platform, were attended to by health personnel, the Malaysian Maritime Enforcement Agency (MMEA) said in a statement.

After the accident, the vessel was anchored about four nautical miles from Kuala Sungai Miri. Other vessels helped to bring the crew to shore before Dayang Topaz sank.

KUCHING: Smart Reader Worldwide mourns the loss of its...

Thumbs up to Keluarga Malaysia Sales event in Dalat

DALAT: The sixth series of the Keluarga Malaysia Sales...

MIRI: The Petronas Ngiling Tikai programme is aimed at...

KUCHING: The Attorney-General's Chambers (AGC) and the Legal Affairs...

Talk on hoarding syndrome this Tuesday

MIRI: Are you suffering from hoarding syndrome? In layman’s...

BINTULU: Seven foreigners were each sentenced to 25 months...

KUCHING: A non-permanent structure was completely destroyed in a...

MIRI: A local elderly man went missing from a...

KUCHING: The Sarawak Museum Department will launch the Sarawak...

Selangau, Kakus and Tamin voters reminded to not repeat past election errors

KUCHING: The Sarawak government is looking into the possibilities...

The love for nature inspired art

Shahrol Haziq, an independent artist, aspires to have a...