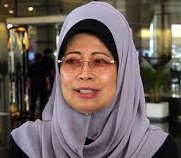 “To impose a curfew on those below 18 years old is not as easy as it sounds,” she said when asked to comment on the proposed night curfew by the federal government.

Fatimah said to have it enforced, it needed to be carefully deliberated.

“We have to discuss with all parties, including the parents, on this and what needs to be done,” she told reporters after officiating at the State-level World Interfaith Harmony Week at the Islamic Information Centre (IIC) here today.

“It is not easy to enforce because the children do not go out physically…they can be at home, but they can be somewhere else. Nowadays, the problem is with social media,” she stressed.

Therefore, she pointed out parents played an important role in setting a time limit for their children.

On Jan 17, Deputy Prime Minster Dr Wan Azizah Wan Ismail said the government was considering imposing a curfew on those below 18 as an effort to curb drug abuse.

However, on March 14 during the Parliament sitting, she said the night curfew could not be implemented yet taking into consideration various reasons.

Wan Azizah said however the federal government was considering imposing the curfew at high-risk (hotspots) areas.