Sarawak is a land of many interesting characters, some of whose stories should be told to enable future generations to know what life was like as an era gone by.

One of the personalities is Stewart Ngau Ding, born into a family of Kayan aristocrats just before the Japanese invasion. He lost his mother a “Dayung” or Shaman, who suddenly died apparently because she had broken certain taboos of the community of pagans at Long Tebangan.

His father Penghulu Jok Ngau took a second wife, but she too died soon after the birth of a younger brother Kelawing. As such Stewart grew up as a self-taught youth whose experienced was through the hard knocks in life.

Stewart who will turn 80 in September said: “The first few years of my school life was spent in the village and my Primary Four certificate was good enough for me to be enrolled into the Batu Lintang Teachers Training Centre and School before I landed a job in the Sarawak Colonial government”.

In his memoir “My Changing World” Stewart spoke about the ancient community’s traditional practices and of their conversion from the old religion of spirits and demons, to Christianity.”

“My Changing World” is about the challenges of being a native civil servant who has served in various stations in the State — from Kuching to Limbang, from Kapit Division to Belaga district, to Bintulu, Miri, Lawas and finally Baram where he served as the first Kayan District Officer.

Stewart’s book highlights some of the old Kayan customs and traditions, taboos and changes that took place especially during the Brooke Era up till World War II and Colonial Rule right up to the present Malaysian administration. 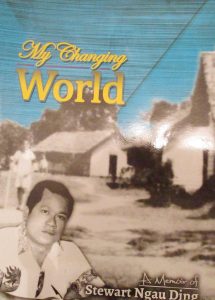 Among some of his tales is that of when he accompanied the community when they went hunting during the annual migration of wild boar and was bitten by one of them.

He reminisced: “I was hardly 10 years old when I tried to spear a large wild boar which came near me. However, after piercing the animal my spear fell into the river as the boar charged through my legs and bit my right thigh. I shouted for help and an old family friend Tama Tinggang came to my rescue.

“He held boar by the head and forced open its mouth with his hands to release its grip on me. The boar was dying partly due to the wound inflicted by my spear. My thigh was bleeding but luckily the wound was not deep.”

Tama Tinggang carried Stewart to the longhouse that was only a stone’s throw away from the scene and he became hero of sorts and the topic their conversation.

Stewart also wrote of his younger days when he had to swim across the river to get to school. “I soon mastered the art of crossing the fast moving currents of the Akah River holding my books and loin cloth with one hand over my head.

“I used the other hand and legs to propel myself across the water to the opposite bank. After school we swam back again,” he wrote.

Stewart was 12 when he went to Kuching to study; on his first day at school he went to class bare-footed as he would do back at Long Tebangan, and he became the butt of jokes.

He joked: “In those days I was so naïve. One day a Malay teacher by the name of Cikgu Abang bin Said asked a question during Malay class; ‘Berapa kali perempuan beranak dalam satu tahun? (How many times does a woman give birth in one year?)”.

“I quickly raised by hand and said: “Dua kali, Cikgu. (Twice, teacher.) There was an uproar of laughter in the class.

However, the tall and stocky Stewart proved to be a talented sportsman; he played soccer and hockey for BLTC and the bare-footed lad even broke the 100 yards Sarawak Schools Athletics record of 10.8 sec by clocking 10.3 sec.

After completing three years at Batu Lintang in 1954, he attended secondary school (Forms 1 to 5) at Tanjong Lobang in Miri and St Thomas’ school in Kuching.

Passing his Senior Cambridge examinations, he was one of 12 natives taken in as Sarawak Administrative Officers (SAO) before he ended up in Marudi as District Oficer.

As a youngster,Stewart would accompany his father and his men for barter trading with the nomadic Penan at a large long hut or “Pasar Tamu” (barter trading market) built by the Kelabits of Long LeIlang. Soon he spoke the Penan language fluently.

Later in the 1980s Sarawak was in the limelight following the discovery of a small group of Penan in the remote jungles of the Baram whom the international community thought were a “lost tribe”.

Stewart said: “Apparently this particular group had avoided contact with other semi-settled Penan for many years. They were very poor and barely wore any clothes. When we met their leader by the name of Moyong he said he wanted to meet “Lake Ja’au Palitah Laki Kayan” —which literally meant The Kayan Big Boss of the Government” — that was me!

“From then on I was treated like a “sebilak” or Penan brother.”

There is a poignant ending to Stewart’s tale, when he was sent to Canada to study for a year. As that was the icing on the cake, he had set a standard for his children some of whom pursued their education up to university level.

Today Stewart lives a quiet life with his wife Magdelene Belawing at their home in BDC where he dotes on his grandchildren.