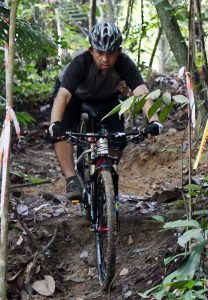 SUNGAI BULUH: I was completely awestruck watching Abang Zaidi and Abang Mat cycle up the steep hill energetically. They then descended with control and expertise as they ride their way around the oil palm plantation.

You would be amazed too, if you saw them. Abang Zaidi, whose full name is Abu Zaidi Abu Hassan and Abang Mat, or Mohd Som Mahat, are both 60 and 61 years old!

At 39, my fitness level was nowhere near theirs. I huffed and puffed as I struggled to push my KHS mountain bike uphill.

Abu Zaidi and Mohd Som are members of a 20-odd WhatsApp group called ‘Geng Barai’. With the exception of the two, the members of the group are all around 40 years in age.

Mountain biking is a form of extreme sport that requires a high degree of stamina and mental resilience. This is in addition to the strong ability to focus because some routes can be highly challenging — uneven, slippery and sometimes downright dangerous.

This makes the sport extremely popular — especially among youths — as they particularly enjoy the adrenaline rush.

Those in their 40s or older typically engage in more recreational form of sports such as running, football or sepak takraw. So what makes mountain biking so appealing to the members of Geng Barai?

Abu Zaidi told me that in addition to improving his physical and mental agility, mountain biking also allows him to meet up with new people and form friendship bonds.

“Mountain biking is very suitable for those aged 40 and above because the sport is less taxing on the knees compared to other forms of sports like running,” he said.

Biking was a great way to de-stress while enjoying the beauty of nature, said Abu Zaidi, and advised those his age to engage more frequently in sporting activities.

The sport has also made Mohd Ridzuan Nordin, 41, quit smoking.

“I was a chain smoker. Things were so difficult when I first tried to quit as I tried everything to overcome my addiction. Fortunately, my friend was an avid mountain biker and I eventually became interested to join him. I was aware that the sport required a great deal of stamina and strength so I became determined to quit smoking.

“It was through sheer willpower and determination that I overcame my addiction,” said Mohd Ridzuan. – Bernama

Police to call up Al Jazeera, journalist over documentary

Agong is first respondent in Census 2020