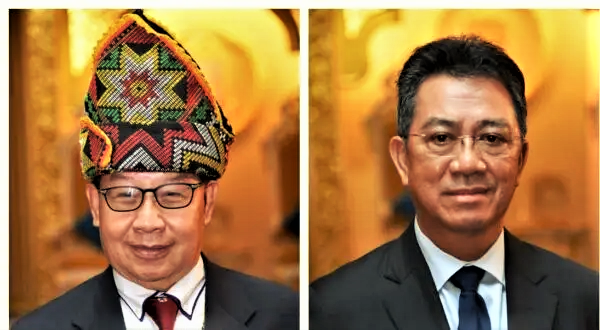 KOTA KINABALU: Two Sabah new Deputy Chief Ministers Datuk Dr Jeffrey Kitingan and Datuk Dr Joachim Gunsalam have pledged to give their best in the service for the people of Sabah.

Jeffrey, who is also state Agriculture and Fisheries Minister, said to give full focus to the responsibilities entrusted upon him, he would resign as the federal Deputy Tourism, Arts and Culture Minister.

“I want to help the people, especially the villagers who are involved in agriculture,” the Tambunan assemblyman told reporters when met outside the Istana Negeri here today.

Another Deputy Chief Minister Datuk Seri Bung Moktar Radin, who is also state Barisan Nasional (BN) chairman and Lamag assemblyman, when approached after the swearing-in ceremony, declined to be interviewed as he was rushing to attend another event.

Earlier, the three Deputy Chief Ministers were sworn in before Sabah Yang Dipertua Negeri Tun Juhar Mahiruddin at the palace.

Jeffrey also said that he is determined to further develop the food sector in Sabah which is seen as important in efforts to develop the socio-economy of the people in the state.

Meanwhile, Joachim, who is also Sabah Industrial Development Minister and Kundasang assemblyman, said his appointment was unexpected, but he was determined to continue working to develop the state’s industrial sector.

“I would like to thank Parti Bersatu Sabah (PBS) president Datuk Seri Dr Maximus Ongkili and the new Sabah Chief Minister Datuk Hajiji Noor for proposing me as the new deputy chief minister.

“After this, I will meet officials from the Ministry of Industrial Development to formulate the direction of this ministry. I will carry out this responsibility as best as I can,” said Joachim who is also PBS vice-president. – Bernama