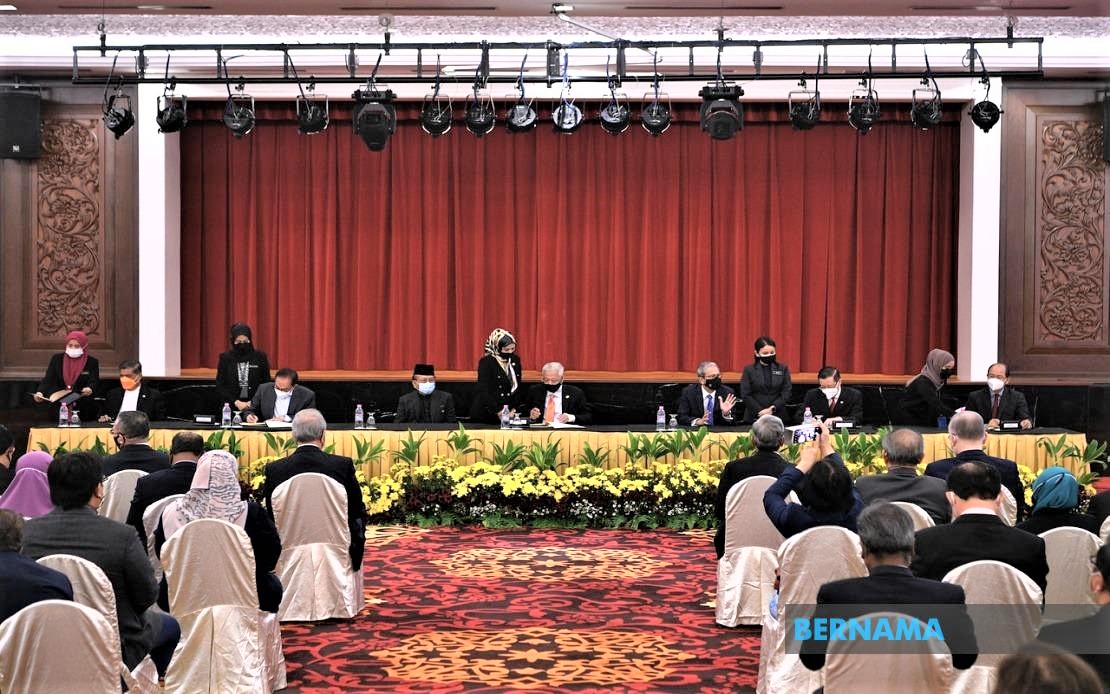 KUALA LUMPUR: The Dewan Rakyat sitting that commenced this week was held in a new political spirit with the signing of a Memorandum of Understanding (MOU) on Political Stability and Transformation between the government and Pakatan Harapan (PH).

The historic MOU was signed by Prime Minister Datuk Seri Ismail Sabri Yaakob and party leaders in PH, at about 5 pm Monday (Sept 13) at the Parliament building, to form bipartisan cooperation which upholds the spirit of the Malaysian Family.

The six-point MOU, which has been agreed to be non-confidential and made public, covers the areas of strengthening the plan to fight Covid-19, the transformation of the administration, Parliamentary reforms, ensuring judicial independence, the Malaysia Agreement 1963 (MA63) and formation of a steering committee.

Among other things, the government agreed not to dissolve Parliament before July 31, 2022, and PH agreed to support or abstain from voting for Budget 2022 and the supply or finance laws related to Budget 2022, while the process of drafting the bills be negotiated and mutually agreed upon.

The cooperation was seen in line with the decree of Yang di-Pertuan Agong Al-Sultan Abdullah Ri’ayatuddin Al-Mustafa Billah Shah in his royal address, when opening the Fourth Session of the 14th Parliament on the same day, advising all quarters to practise deliberative democracy in finding solutions to any problem.

Following that, the debate on the motion of thanks to the royal address on Tuesday and Wednesday revolved around the MOU with the majority of Members of Parliament (MPs), both in the government and the opposition, welcoming the initiative of Prime Minister Datuk Seri Ismail Sabri.

Datuk Seri Mohd Shafie Apdal (Warisan-Semporna) said although the party remained committed to play a check and balance role, describing the party-hopping elements implemented through the MOU as a positive development in achieving political maturity.

“Warisan will continue to be committed to fighting for national issues with the government. Priority will be given to issues that have direct implications for the people,” he said, during the Dewan Rakyat sitting.

However, it was not a Dewan Rakyat sitting if it was not interspersed with the exchange of heated words between MPs that led to an uproar, and this time, RSN Rayer (PH-Jelutong) was ordered to leave the Dewan Rakyat after refusing to retract the word ‘memalukan’ (shameful) against the Deputy Speaker Datuk Mohd Rashid Hasnon.

The uproar, on the second day of the sitting, erupted when a motion proposing to replace Speaker Datuk Azhar Azizan Harun, was raised by opposition MPs.

Meanwhile, political cooperation to solve problems and restore the country, currently in the fight against the Covid-19 pandemic, became one of the issues raised by most MPs during the debate on the motion of thanks for the royal address.

However, Azalina raised eyebrows when she suddenly appeared to preside over the Dewan Rakyat sitting during the debate on the motion of thanks for the royal address on Wednesday, by giving an explanation that she was actually asked by Azhar to do so in accordance with Standing Order 7 (3) of the Dewan Rakyat.

The current sitting of the Dewan Rakyat will take place for 17 days, until Oct 12. – Bernama

A specific body will be set up to study the implementation of forest carbon management activities following the passing of the Forests (Amendment) Bill...

Why the high assessment rates?

Previous articleSarawak — where unity and harmony prevail
Next articleWe’ll have our own Bukit Jalil: Abdul Karim

THE Federal government has been urged to seriously look...

CCTV resolutions to be upgraded to fight vandalism

KUCHING: TVS inked a Memorandum of Understanding (MoU) with...

Jalan Batu Kitang-Stephen Yong to be upgraded to four lanes

PLANS are underway to upgrade Jalan Batu Kitang towards...

THE Regional Corridor Development Authority (RECODA) will review the...

Projects for rakyat needs to be delivered on time

DELAYED projects would prevent the rakyat from enjoying their...

THE gazetted Mangrove Forest Conservation Area in Sarawak should...

KUCHING: The police are still tracking down two men...

EXPRESS boat owners and operators are urged to submit...

A specific body will be set up to study...

THE Sarawak government should not put billions of ringgit...

Why the high assessment rates?

IF the PR1MA Bintawa Riverfront housing scheme is considered...