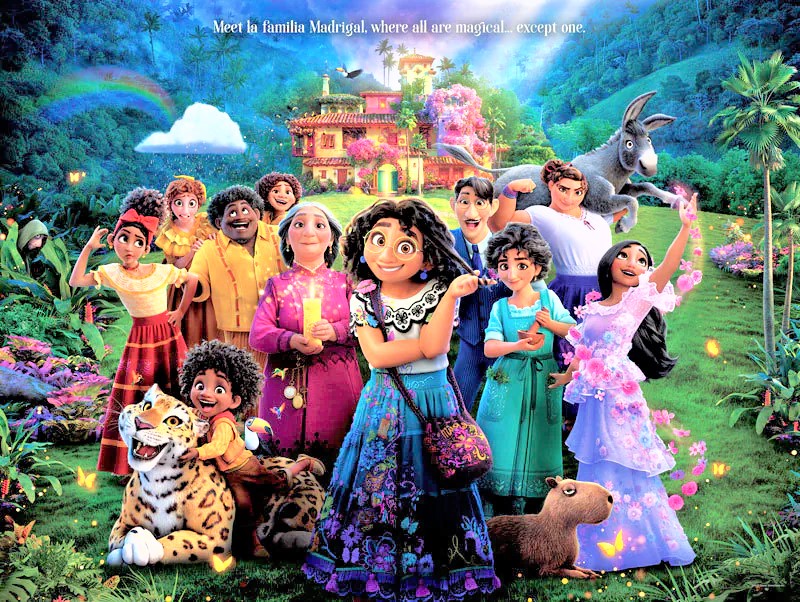 HOLLYWOOD, United States: With a sprinkle of magical realism and catchy tunes by Lin-Manuel Miranda, Disney again claimed Oscars gold for best animated film Sunday with “Encanto,” a colourful celebration of Colombian culture and the importance of family.

“I am so proud to be a part of a film that puts beautiful, diverse characters in front and centre, and that people everywhere are seeing themselves in the film,” producer Yvett Merino told the audience at the Dolby Theatre.

The movie tells the story of Mirabel, an ordinary teenager born into the charmed Madrigal clan, living in a secluded paradise of lush gardens and towering mountains. Every family member has a special superpower — except for Mirabel.

To the rhythm of Colombian folk music styles like vallenato and bambuco, and with coffee and arepas on the stove, the Madrigals use their gifts to help their fellow villagers with whatever they need.

But the magic — generated by a supernatural candle — suddenly starts to fade, requiring the family to unite to save their home and their community.

The tender ballad recounts the love story of the family matriarch Abuela Alma, and how the enchanted candle came to her when her husband Pedro was killed by invaders who forced the family off their land.

The scene recalls the decades-long conflict in Colombia pitting the government against armed rebels, anchoring the film in the country’s tortuous history.

‘We Don’t Talk About Bruno’

Mirabel, who is Alma’s granddaughter, feels as though she has let the family down, and that its fading magic is her fault. Alma does not exactly dissuade the teen of this notion.

Another key element of the story is the re-emergence of the family’s black sheep, Bruno (played by John Leguizamo), who went into self-exile after a disturbing vision of the future involving Mirabel.

“We knew he was someone people would gravitate towards,” one of the film’s co-directors Jared Bush told Variety.

“John was so spectacular: funny, lovable and weird — and in not a lot of screen time!”

One of the film’s lasting legacies will be the runaway success of “We Don’t Talk About Bruno”, a catchy mix of hip-hop and Cuban rhythms written by Miranda that topped the Billboard Hot 100 chart for weeks.

“Every family has an outcast or someone who feels like an outcast. I think it’s one of the reasons the character has taken off. A lot of people feel like a black sheep,” co-director Charise Castro Smith told Variety.

The story ultimately is an ode to inclusivity, and how every member of a family can contribute, with or without special gifts.

“Encanto” is a triumph of representation on the big screen — Disney is well known for its perfect princesses with long hair and ball gowns, but Mirabel has unruly curls, wears glasses and traditional clothes, and doesn’t have a superpower.

The cast is made up almost entirely of Hispanic actors and opens with a line in Spanish: “Abre los ojos” or “Open your eyes”. The spectacular animation includes painstaking details in the traditional clothing worn by the characters.

Bush tweeted that the film’s cast and crew were “overjoyed that so many people are seeing themselves in this film”. – AFP