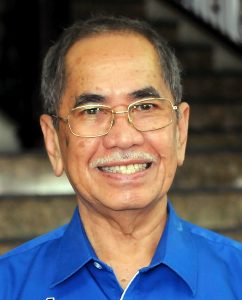 KUCHING: It’s about time the government do real work instead of wasting so much time politicking, said a member of parliament.
“Improve living standards, control costs of living, increase income levels of every segment of society in urban and rural areas by introducing alternative programmes to employment and traditional methods of livelihood and continue programmes to improve the living standards of the urban and rural poor,” said Santubong MP Datuk Seri Dr Wan Junaidi Tuanku Jaafar (pic).

The former federal minister also called on the Pakatan Harapan (PH) federal government to share the nation’s wealth wisely and fairly instead of thinking about luxurious projects that have little impact on people’s livelihood.

He said too much politicking was going on, so much so that government officials and policymakers spent long hours on political arguments.

“Yet the major factors, like graduates employment, high-income programmes by introducing creative and innovative alternative jobs and entrepreneurship are being neglected,” he said.

Wan Junaidi also called on the federal government to assist states like Sarawak and Sabah to develop much-needed infrastructure so that “equal opportunity and equitability can be created.”

He said there had been far too many infrastructure projects being cancelled, delayed or postponed, and this should not have
happened.

For example, he said, the RM127 million water project for Lundu, Sematan and Tasik Biru was never heard of any more while roads for Kampung Semilang, Beradek, Tiang Api, Sungai Pinang and Tanju had been delayed.

“These are opportunities lost and the deprivation of much-needed amenities,” he said, adding that these projects were approved during the time of the Barisan Nasional (BN) government in 2016 and 2017.

“Let the succession plans of individual parties be the internal matters of the parties or governing coalition, but development matters are public domain that ought to be given priority,” he stressed.

He said money from Petronas ought to be used to assist Sarawak to develop rather than facilitate unnecessary federal government spending that gave no benefits to Sarawak.

‘EnterSarawak’ form must be filled first