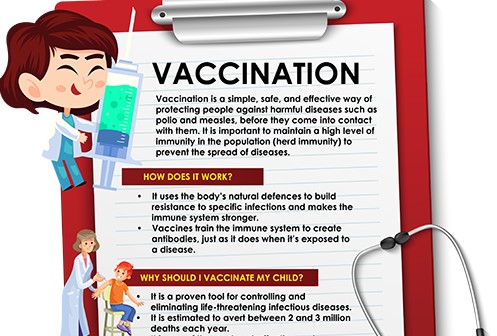 KUCHING: Take note of polio fatalities if you are opposed to vaccines or before you oppose vaccination of children, said the state Health Department.

To parents who oppose vaccination (also called ‘anti vax’ parents), the department has urged them to understand the importance of vaccines for their children.

Its director, Dr Chin Zin Hing, advised parents to not be easily influenced by anti-vaccine propaganda — particularly those on the Internet.

“Information on vaccines should be sourced from credible experts and competent authorities. The Ministry of Health can provide such information should parents inquire about vaccines or immunisation of their children,” he told New Sarawak Tribune.

He told parents that due to the risk of morbidity and mortality from polio infection, parents should always be mindful of the danger of polio and ensure complete vaccination of their children in order to protect them.

Polio, a viral disease, usually affects children below five years of age. Most people infected with the virus do not show any symptoms and only one out of four have flu-like symptoms which usually last for two to five days, and the person may recover without any complications.

On Jan 10, two more cases of poliomyelitis (polio) were detected in Sabah, bringing the total number of children having the disease in the state to three.

Dr Chin explained that a small proportion of the victims might have severe symptoms such as numbness, meningoencephalitis and paralysis following infections of the central nervous systems.

He also pointed out that it is important for current and future parents to note that pox virus is spread by direct contact, primarily through the fecal-oral route and, less often, through contaminated water or food leading to multiplication of the virus in the intestines.

Besides that, Dr Chin also explained that before vaccines are marketed commercially for use, they are rigorously tested in thousands of people in progressively larger clinical trials which are strictly monitored for safety.

“The Drug Control Authority, Ministry of Health Malaysia must register and approve a vaccine before it can be used and introduced in the immunisation programme in the country,” he said.

“Children are most at risk of polio. Parents and caregivers should ensure that all children are vaccinated up to schedule.

“Polio vaccines are extremely safe and effective and have resulted in global cases decreasing by over 99 per cent and the vaccines must be administered multiple times to stop outbreaks and protect children.”

Dr Chin explained that a child’s body naturally produces cells and antibodies to help protect against viruses and bacteria. These defence mechanisms can be stimulated when a vaccine is administered into the body.

“The antigens in vaccines act to stimulate the immune system to produce antibodies against specific diseases, thus strengthening immunity by priming the defence cells to recognise the particular virus or bacteria so that they can better fight it in the future,” he said.

The maximum effect of the vaccine will usually only take effect after the last dose in the schedule has been administered.

Children are most vulnerable to vaccine-preventable diseases due to their weaker immune system.

“Vaccines help strengthen their immune system and protect them from potentially life-threatening complications,” he said.