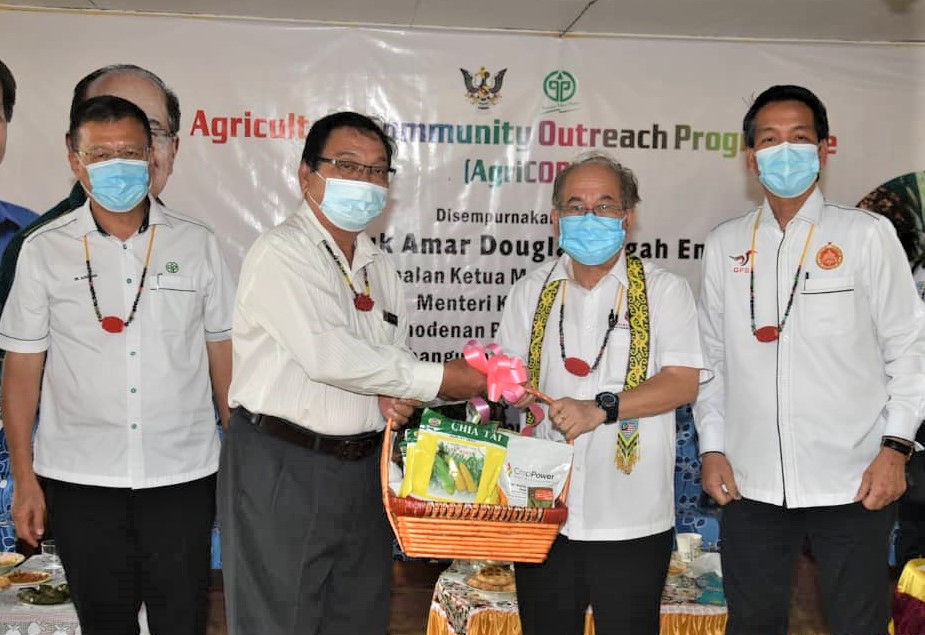 MIRI: Telang Usan folk have been told not be easily misled by the opposition.

Deputy Chief Minister Datuk Amar Douglas Uggah Embas said with the state election on the horizon, the opposition would do their best to get Telang Usan constituents to vote for their candidate.

“As usual, they will resort to making all kinds of sweet promises and claims,” he said when closing the two-day Agriculture Community Outreach Programme (AgriCOP) at the Kampung Long Loyang community hall here yesterday.

He said they should learn from the past where they had supported a member of parliament and a state assemblyman from the opposition, and they had not delivered anything significant to the people.

“They had failed to deliver what they had promised, which had affected the people. But the situation is much different now, your current representative Dennis Ngau, who is in the Gabungan Parti Sarawak (GPS) government, has done and achieved a lot for you.

“He (Dennis) is young, hard-working and full of ideas on how to bring in more progress. He is also vocal in bringing Telang Usan needs in the state legislative assembly sittings.

“He has behind him the very stable, very strong GPS government whose objectives are to serve the people and to protect the state rights and wealth.

“So, my advice is to give him your votes. Let him and the GPS government win handsomely,” he added.

Uggah said the GPS government had also made it one of its core objectives to properly develop the rural areas.

“The Highland Development Agency (HDA) here was created out of this concern and where an initial budget of RM1.5 billion had been allocated to implement basic infrastructures like roads and bridges so important for its overall accessibility.”

In addition, Uggah said the state government was in the process of planning for development projects under the 12th Malaysia Plan.

Meanwhile on agriculture, Uggah, who is the Agriculture Modernisation, Native Land and Regional Development Minister, said Telang Usan with its vast land had huge potential for coffee, durian, pineapple, herbs and ‘Terong Asam’ (eggplant) cultivation besides livestock such as pig breeding.

He said four AgriCOP had been organised here but Dennis had requested for three more, in addition a sum of RM2 million too had been allocated here to implement various agriculture programmes and activities.

At the function, Uggah also announced an additional grant of RM500,000 for the implementation of agriculture programmes and activities.

He also announced grants of RM40,000 to improve drainage at Long Anap paddy planting area besides RM30,000 and RM10,000 respectively for the Kampung Long Loyang village development and security committee (JKKK) and its Women Bureau.