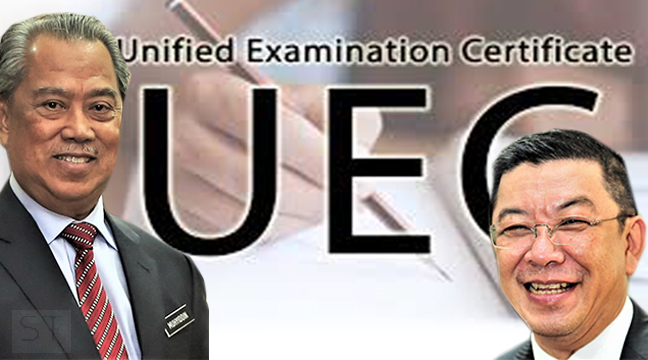 KUCHING: Prime Minister Tan Sri Muhyiddin Yassin did not close the door when he said there was room for discussions with regards to governmental recognition for the Unified Examination Certificate (UEC).

This was the interpretation and understanding of Sarawak Federation of Chinese Associations (SFCA) present Datuk Richard Wee concerning a statement by the Prime Minister’s Office (PMO) which clarified that Muhyiddin had never said that the government would recognise UEC.

Wee, who is also a committee member of the Federation of Chinese Association Malaysia (Hua Zhong), said for it (Hua Zhong) to jump the gun and said that the PM promised to recognise UEC was not correct.

“He never said that,” said Wee.

Muhyiddin had a meeting on July 16 with leaders of Hua Zhong and today his office said that he did not say the government would give recognition to the UEC.

The SFCA president said what did happen during the meeting was that Muhyiddin expressed his hope that the UEC issues could be solved.

“Muhyiddin’s response during the meeting was that issues surrounding the UEC had been going on for many years. He said there was no reason for UEC not be recognised if the syllabus was more inclusive and included Bahasa Malaysia and History subjects.

“So, from our perspective, we take it positively because the PM never said he would not recognise nor reject UEC. He said as long as we can fulfil all the criteria and we can continue to have discussions, we will work towards resolving the matter,” said Wee when contacted by New Sarawak Tribune on Sunday (July 19).

On the other hand, according to the PMO’s statement, the prime minister instead said UEC had gained partial recognition when the government previously accepted UEC holders for a teaching degree programme (PISMP) specialising in the Chinese language at Institut Pendidikan Guru Malaysia (IPGM).

It said in 2012, the government accepted UEC holders for the PISMP programme in Chinese language on condition that they passed the Sijil Pelajaran Malaysia (SPM) and obtained at least a credit in Bahasa Melayu.

“The prime minister also stressed that UEC should follow the National Education Policy if it is seeking a resolution of the matter by the government in the future,” the statement added.