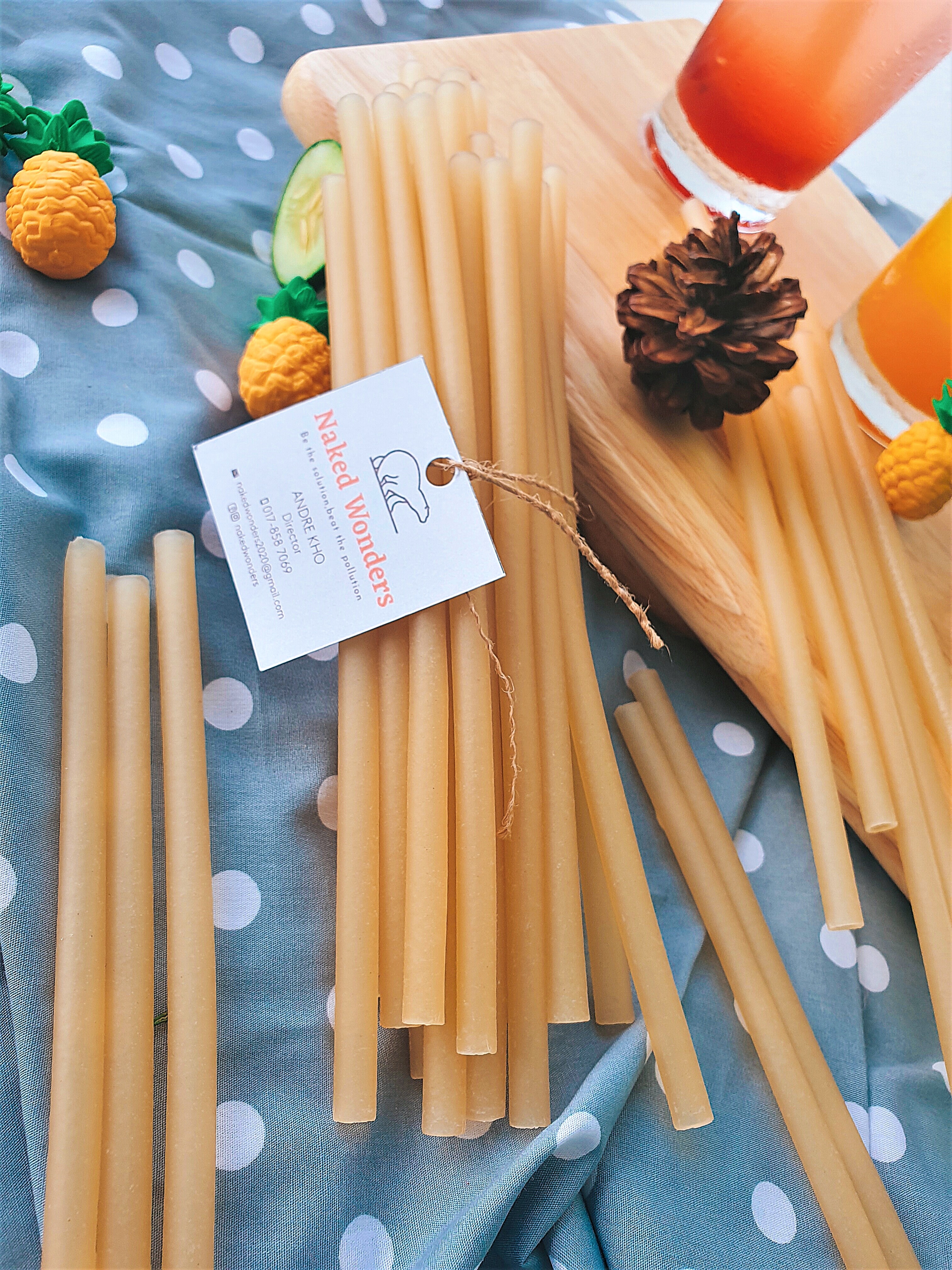 The founders of Naked Wonders found a way to ‘eat your way out of pollution’ through the innovation of edible straws. Made out of rice and tapioca, Melissa Kung and Andre Kho’s efforts have seen initial success as cafes and restaurants around Kuching start to adopt their ‘No Straw Please’ movement.

Inspired by love for Mother Earth

Cafe patrons in Kuching may have notice a trend of edible rice straws in drinks from certain cafes and restaurants. At first glance, it may look like a normal, bio-degradable, environmental-friendly straw, but it is made out of rice and tapioca which is of course, edible!

The trend was introduced by Kuching-based Naked Wonders through their ‘Eat your way out of pollution’ campaign. Dubbed as “Fàn-Straws”, the straws can either be munched on or left to biodegrade on its own within 90 days.

According to Naked Wonders’ co-founders Melissa Kung and Andre Kho, even if the straw is disposed off in drains which then leads to the ocean, “it will become food for marine life. It can even be used as fertiliser for plants.”

The initiative was inspired by Melissa’s love for Mother Earth. The renal nurse shared that she wants to dedicate herself to contribute to the ecosystem in any way she could.

“I love everything nature has to offer. From the beautiful rainforest to the beaches and mountains. It breaks my heart to see that us as humans are taking things for granted and doesn’t appreciate nature.” She recalled the times she went for a picnic at the beach, and a recent hike at a jungle trail, “People just leave their trashes behind!”

In order to do her part, she initially started segregating wastes and recycling. “I actively participated in the Kuching City South Council (MBKS) ‘Buy Back Programme’ for five years, and it encourages a zero-waste lifestyle.”

The 35-year-old shared that the campaign allowed her to bring recyclable items in exchange for coupons to redeem household item such as brooms, mops, toilet rolls and others, “This way, I don’t have to make an extra run to get the items which will end up in more wastes in terms of fuel, money and more plastic bags to store them in.”

As an environmentalist, she also trained herself to use recyclable bags during grocery runs. At eateries, she practices the ‘No Straw’ policy by bringing her own metal straws. Melissa revealed that she was motivated after watching a video of a turtle with straws stuck in its nostrils.

Andre then shared how scary Melissa would be when plastic straws came with their drinks even after telling the servers no. “But I hated metal straws because they were hard to keep and can be easily lost. We have to wash them after every usage, they gave off a metallic taste and they are dangerous especially to children.”

However, Melissa disagrees with Andre each time he opted to drink without the straw. “She says it is about creating awareness of not using plastic straws.” Soon enough, coffee shops that they frequented started noticing the duo’s habits. They stopped giving them straws and even inquired about the metal straws they were using.

“I was one of those people who knew about climate change but wasn’t too interested to do anything about it. That’s when I met Melissa,” Andre admitted. His journey with her had widen his horizon about the environment, “The more you learn, the more you will appreciate and become aware of the issues.”

However, he does not regard himself as an environmentalist like his other half. “But she definitely influenced me and I do believe that we can and should change certain habits in our lives.”

In October 2019, Andre stumbled upon edible straws made from rice and has been using them ever since. They both then started to advocate the use of edible straws through Naked Wonders in February 2020, with the mission to eliminate the usage of plastic straws in Sarawak.

The name was chosen as it represents the world in its originality, “That is without emitted pollutants such as fossil fuels and carbon footprint created by humans. You know, it’s a wonderful thing to care about the world as it is our home, we won’t have another chance should we destroy this one,” shared Melissa.

As an environmental lifestyle company, Naked Wonders aims to make sustainable and eco-friendly practices to be fun, convenient and for the interest of every individual. “For now, we hope to continue helping the ‘No Plastic Straw’ campaign initiated by Kuching City South Council MBKS and live the new normal with better practices.”

The duo hopes that Sarawakians will support the cause in order to safeguard the environment for future generations. As the Native American proverb says, ‘We do not inherit the Earth from our ancestors. We borrow it from our children’.