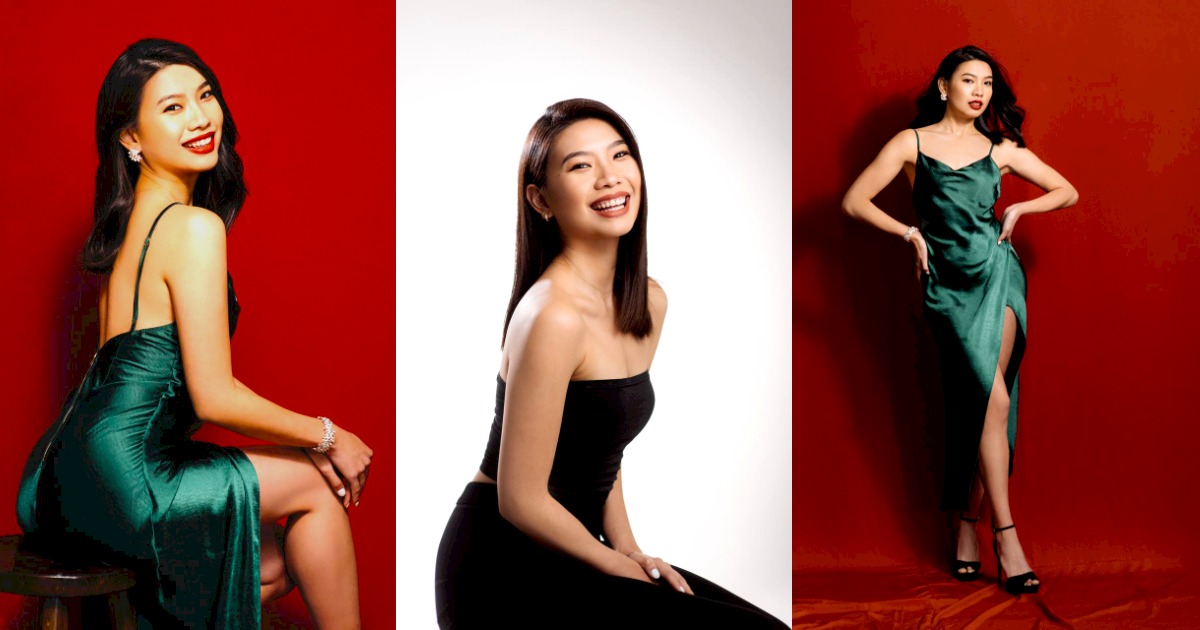 Evelyn – beauty with a purpose

The 25-year-old Sarawakian has always been interested in modelling and fashion since her younger days.

From the age of four to 17, Evelyn did ballet, and when she moved to Australia at the age of 15, her mother signed her up with an acting agency.

In 2012, she was cast as a body double for the heroine in the movie ‘The Wolverine’ featuring Hugh Jackman which was filmed in Tokyo, Japan.

She is currently in Kota Kinabalu, Sabah as the pageant finals is set to be held at the Sabah International Convention Centre tomorrow (Aug 27).

Beauty pageants had always been something that Evelyn had been interested in but she never thought it would be possible for her to involved in given that she was either studying or working.

She returned to Kuching from Sydney at the end of January this year for a holiday and to catch up with her loved ones.

“I was supposed to leave for Sydney in March, but one thing led to another; I told my mother I wanted to quit my job to move to Melbourne because my older brother and his family had moved there.

“In Sydney, I was always by myself, so I thought why not try it out in Melbourne. Seeing as I am in-between moving states and jobs, I wanted to stay in Kuching as long as I could,” she explained.

Evelyn submitted her application for the Miss World pageant back in April, but she did not hear from them until the end of June.

By then, she was back in Australia to visit her brother and his family as well as move her things from Sydney to Melbourne.

“I went for the virtual audition and then I made plans to come back to Kuching,” she said.

For the semi-final, Evelyn had to create four videos, namely talent, catwalk, advocacy, and introduction which will be judged based on their contents and how well they are presented.

Within a week, she had to get a team of photographer, videographer, makeup stylist, and fashion designers.

Describing it as a new experience and challenge for her, she was thankful that she had people who were very supportive and willing to help her get in touch with the right talents.

“Although I have done modelling and fashion in the past, I have always been the person in the chair where everything is all ready. So, this time around I had to make sure everything was done and that the team was brought together,” she said.

Blood is thicker than water

As the youngest in her family, Evelyn is very close to her mother and siblings.

Describing her mother as her best friend, she said she appreciates how her mom has been really supportive and very involved in her beauty pageant journey.

“My mother has been with me for my fitting sessions, I love and need her input. Even when I have made my decision, it’s great to hear her agree and see things the way that I do.

“On the other hand, my sister has been helping me out for the question-and-answer sessions which I appreciate very much,” she said.

Evelyn added that a strong support system with people you can trust is significant even if the circle is small.

“Sometimes you just need people who you can talk to and who will listen to you – it is not always about finding or coming up with solutions,” she said.

On her late father, Evelyn said he was very supportive of her – be in academics or performing arts.

Her father passed away two years ago; she was unable to return to Kuching then as the COVID-19 pandemic was at its peak.

“I think he always knew that I was into beauty pageants and performing arts, so he was very supportive. However, he always gave priority to education.

“If I started working and I still wanted to pursue something creative I can go ahead but to him it was important I have something to fall back on in case things did not work out,” she said.

One great advice from her late father which Evelyn holds onto dearly is, “do and give your absolutely best, do not do things half-heartedly”.

He always told her to just do her best.

“Being one per cent better than before is a very achievable target – when you’ve got it in your mind to do better by one per cent, you’re going to get better and will be able to do it,” she said.

For the pageant’s ‘Beauty With a Purpose’ category, Evelyn chose to work with BeFrienders and to advocate mental health.

Despite some progressions, mental health continues to be a taboo topic, especially among Asian societies.

Befrienders is a not-for-profit organisation providing free 24 hours a day and seven days a week emotional support for those who are lonely, in distress or despair, and having suicide thoughts.

“Through my personal and work experience as a nurse as well as what I went through during the pandemic, I wanted to shine more light on mental health,” she said.

Evelyn said she loves what Befrienders stands for – you do not have to be a professional or medically trained to help others; you just have to lending them your ears.

She pointed out that Befrienders stresses how no one is alone and there is always someone that you can talk to.

“Not everyone wants solutions, they just need someone to talk to and listen to them. I want to normalise conversations surrounding mental health.

“Unfortunately, it is still a taboo that is often equated with negative connotation though it is normal. Your mental health is as important as your physical health – there is no point if you are physically fit and healthy, but your mental health is not taken care of.”

Stressing that everyone deserves a chance to be happy, she said that is a need to raise greater awareness about mental health in the community.

“I am very passionate about this; everyone has his or her own struggles, but it is okay. Everyone needs to be nicer and more understanding to each other instead of being quick to judge,” she said.

Describing the opportunity to represent Sarawak as an honour, Evelyn said Sarawak and its people have so much to offer.

Although the creative community in Sarawak may be small compared to others, Evelyn believes that it is very strong and filled with talented individuals who have yet to be discovered by the world.

“With me representing Sarawak in the final, it also provides a platform for other talents to shine like my fashion designers, videographers, and photographers.

“Not many people may be aware of this but when it comes to beauty pageants, it is not just about you – it is about your team because without your team, you are nothing,” she said.

Recalling a conversation that she shared with her sister, Evelyn said they made a comparison about the sense of belonging in the community between a big city like Sydney and a small one like Kuching.

In Sydney, she often spends most of her time being alone going about her own things whereas in Kuching she is always surrounded by friends and her family.

“I told my sister I would usually eat my meals alone with earphones on and not talk to anyone when I’m in Sydney – this was shocking to her because she never does that at all, especially when she’s in Kuching.

“She said,  ‘Isn’t it interesting when you are in a big city filled with people, unlike Sydney where you are always alone, but in a small city like Kuching you are never alone’.

“Ever since I’ve been back in Kuching, I always have someone with me or people to be with – everyone is so inclusive here and I love that,” said Evelyn.

Evelyn is very grateful that she has a strong support system as it helps to overcome challenges.

As a fresh face in the beauty industry, she said she will give her 100 per cent and bring pride and glory to Sarawak.

“No matter what happens, I am very grateful to be able to have this experience,” she said.

Acknowledging how comparison is bound to happen in the beauty industry, she said she overcomes it by focusing on herself.

“While it is human nature to compare, I do not want to unnecessarily intimidate myself because it is not healthy. I am focusing on myself on what I can do and achieve as well as how best I can do my work.

Evelyn wants to inspire her fellow Sarawakians, especially the youths to pursue and achieve their dreams.

She said one need not be shy or intimidated about having big dreams because anything is possible through hard work, dedication, and passion.

“Something that I’ve noticed which is something that I have been a victim of is being too self-critical. There were times when I found myself saying I was not good, skinny, pretty or qualified enough, but I realised that I would never say these things to my friends or loved ones so why would I say these to myself?

“I want to inspire people to believe that they can do whatever they set their mind to. If it is good for them and the people around them, go for it,” she said.

Noting that different people have different strengths, she said they should not shy away from pursuing their strengths.

She said it is important to be more uplifting and supportive of the dreams people have.

“Instead of looking at why things cannot work, they must look at how it could work. This goes back to my late father who said, ‘Do your very best and do not do it half-heartedly’,” she added.

On her advice for those who dream about joining a beauty pageant, Evelyn encouraged them to seize the opportunity.

She said it is important to have the right people around in the support system throughout the journey.

“Know and remember your worth, be humble and kind – beauty pageant is not only about you; it is about the team behind you and the voice that you have to help your community,” she said.