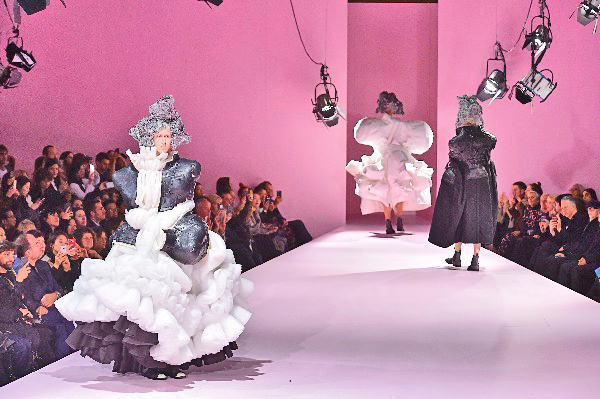 When the lights turned bright in the ballroom of the Élysées Montmartre in Paris, a creaky, old music venue that first opened its doors here in the 1800s, the lead model to appear on Comme des Garçons’ elevated catwalk was dressed in white. It was not exactly a dress. It was more like a shell or a Fernando Botero sculpture or a Michelin woman or an abstract interpretation of the female form – bloated, twisted and armless.

Not quite otherworldly, the model was grounded – wearing a pair of customised, Nike Flyknit sneakers.

The shape of this young woman is captivating because even though the silhouette of her body is contorted, it’s still possible to understand all the reference points: the heavy bosom, the wide bottom, the broad hips, the attenuated waist. We understand what is what even though it’s all an exaggeration. And we are left to decide whether we find it attractive – or not. How much control do we have over own silhouette, over our own presence? Perhaps, very little.

More than drawing an audience to look at her designs, Rei Kawakubo forces us to look inward and to question ourselves.

In May, the Costume Institute at the Metropolitan Museum of Art will open the doors to its spring exhibition which will examine Kawakubo’s work over the course of some 30 years. Her designs for Comme des Garçons have deeply influenced fashion and altered the way that even the average person dresses. (Who do you think popularised the notion that head-to-toe black was chic rather than gruesome?)

And in recent years, Kawakubo has offered some of the most thought-provoking commentary on the nature of dress, our definition of beauty and the autonomy of the female body.

Her fall 2017 collection took on all those questions. Her meagre notes on her inspiration – “the future of silhouette” – suggested that maybe these garments, these wearable sculptures were predictive of a next-generation filled with distorting obesity. Or maybe we can look forward to a future that doesn’t use the hourglass, Barbie-doll figure as the standard. Maybe big will be inarguably beautiful.

For this collection, Kawakubo also refrained from using, what she described as “fashion fabrics.” These garments were not constructed from silk or cashmere, taffeta or satin. Instead, they looked as if they’d been stitched from old upholstery, thick rug pads, grimy insulation, cheap brown wrapping paper and even industrial foil.

There were dresses that looked like body casts and others that called to mind the piles of dirty, piled blankets in which the homeless are often swaddled. If the materials are poor – the sort of stuff that is often cast off – can it be transformed into something of value based on its new shape? Based on the hands that have touched it? Based on a red velvet ribbon tied sweetly around the waist?

When customers question the cost of designer garments, fashion houses are quick to point to the expense of the materials. People instinctively reach out and touch a garment before deciding whether they’d like to try it on. There are some fabrics that appeal to our senses, that we have been taught are luxurious. Others repel us. But we can learn new lessons. Or at least Kawakubo is trying to teach us a few.

In the pieces that Kawakubo showed, the models’ arms were often encased within the garment. On their own, they couldn’t escape these confining silhouettes, just as we can’t escape our own body. We have to get comfortable with ourselves.

This collection wasn’t all ponderous. It was strange and goofy. Some of those foil poufs looked like old-fashioned tins of Jiffy-Pop, stovetop popcorn. Some of the dresses looked like they’d been adorned with rolls of Scott toilet tissue. The models’ hair had the metallic gleam of Brillo pads.

On the runway the models would lumber towards each other, pause, stare and step away. It was as if they were sniffing each other out – as curious about what they were seeing as the audience was about what it was witnessing.

It was Kawakubo’s brand of showmanship – intellectualism served up with a wink at popular culture, a hint of wry humour and, for fall 2017, the universality of the Nike swoosh. – WP-Bloomberg

KAPIT: Scrap metal dealers are advised to be wary of purchasing stolen goods. The Kapit District police headquarters (IPD) through a statement on its Facebook...

Man gets 12 months for punching aunty

Not a pull but total nuisance

KUCHING: It is hoped that following the disruption and...

KUCHING: RM100 mln will be allocated to Sarawak to...

Cabinet to deliberate on alternative sentence to mandatory death penalty

KUCHING: Reports on a study about an alternative to...

KUCHING: Bank Rakyat will look into ways to provide...

Journalism is the protection between people and any sort...

KAPIT: Scrap metal dealers are advised to be wary...

Man gets 12 months for punching aunty

KUCHING: A local man will be spending time in...

SIBU: A man, who faced four charges of cheating,...