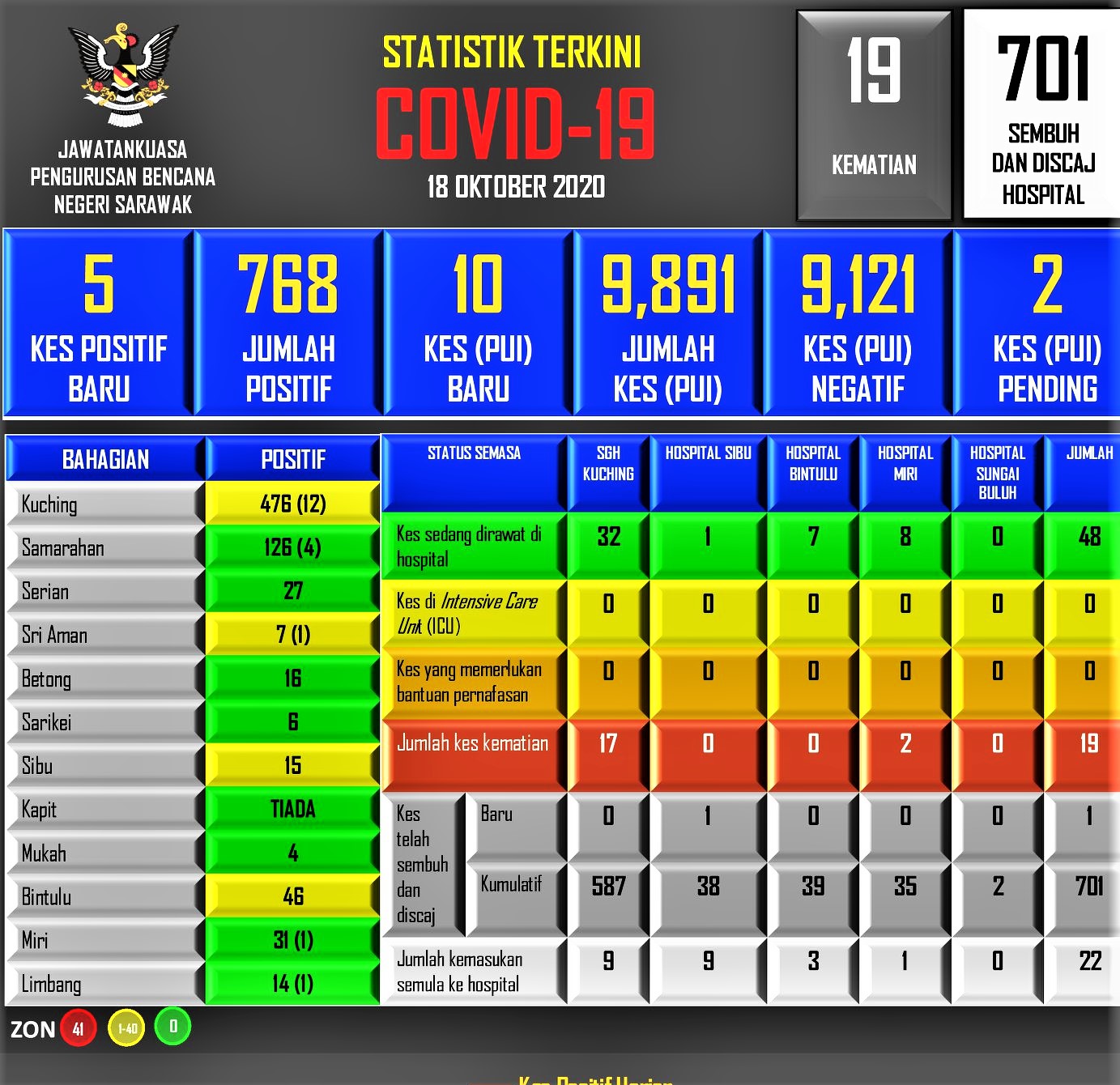 According to the Sarawak Disaster Management Committee (SDMC), all the cases were detected in Kuching district.

“Cases 764 to 767 are close contacts of a positive case. They were detected through a second screening on Day 10 while the contacts were under 14-day quarantine.

“The index case for the cases was case 719 who had travelled to Sabah and found positive for Covid-19 on Oct 6. The infected children whose ages range from 7 to 14 are siblings and children of cases 719 and 730, all related to the Bah Arnab Cluster,” SDMC said.

SDMC’s statement added that the exposure time for the cases was between Oct 2 and 6 when case 719 was quarantined at home.

After the first RT-PCR test was conducted on Oct 6 all four cases were found negative of Covid-19 on Oct 8. They were put in a quarantine centre after three new cases were detected during on Oct 8.

On Oct 16, the cases went through the rT-PCR screening test for a second time, and their results were found to be positive but asymptomatic.

“All have been admitted to Sarawak General Hospital (SGH),” the statement said.

Case 768 is a local man who is a private technician at a government hospital in Kuching. He had a fever and cold on Oct 15, and underwent rT-PCR screening at a government clinic on Oct 16.  The results showed positive the next day (Oct 17).

This case has no history of traveling abroad or visited any high-risk areas, and he also does not have contact with any positive case.

“He is at SGH for further treatment. This case is still being investigated to find out the cause of infection. Contact tracing for this case is also underway,” it again added.

To date, there are two remaining active clusters in Sarawak — Bah Arnab Clusters in Kuching and Putra Cluster in Bintulu.

With the new cases reported yesterday, there were four new additions to the Bah Arnab Cluster involving close contacts of the index case.

“For Arnab Cluster, a total of 40 individuals have been screened and 12 cases were found positive. Eight were detected through the second screening on day 10 of the quarantine, and the remaining 28 individuals tested negative.

“As for the Putra Cluster in Bintulu, 190 individuals have been screened. Six were positive and 183 tested negative,” the statement said.

One patient had recovered and discharged from Sibu Hospital, bringing the total number of recoveries in the state to 701 or 91.28 percent of the overall cases.

The statement added that 48 patients are currently treated at hospitals — 32 at SGH, eight at Miri Hospital, seven at Bintulu Hospital, and one at Sibu Hospital.

On the number of persons under investigation (PUI), the committee said ten new cases were recorded on Sunday (Oct 18), with two cases pending lab test results.

Since the first positive Covid-19 case was reported on March 13, the state has recorded 19 deaths.

Kuching, Sibu, Bintulu, and Lubok Antu districts remain yellow zones in the state, with 36 other districts classified as green zones.