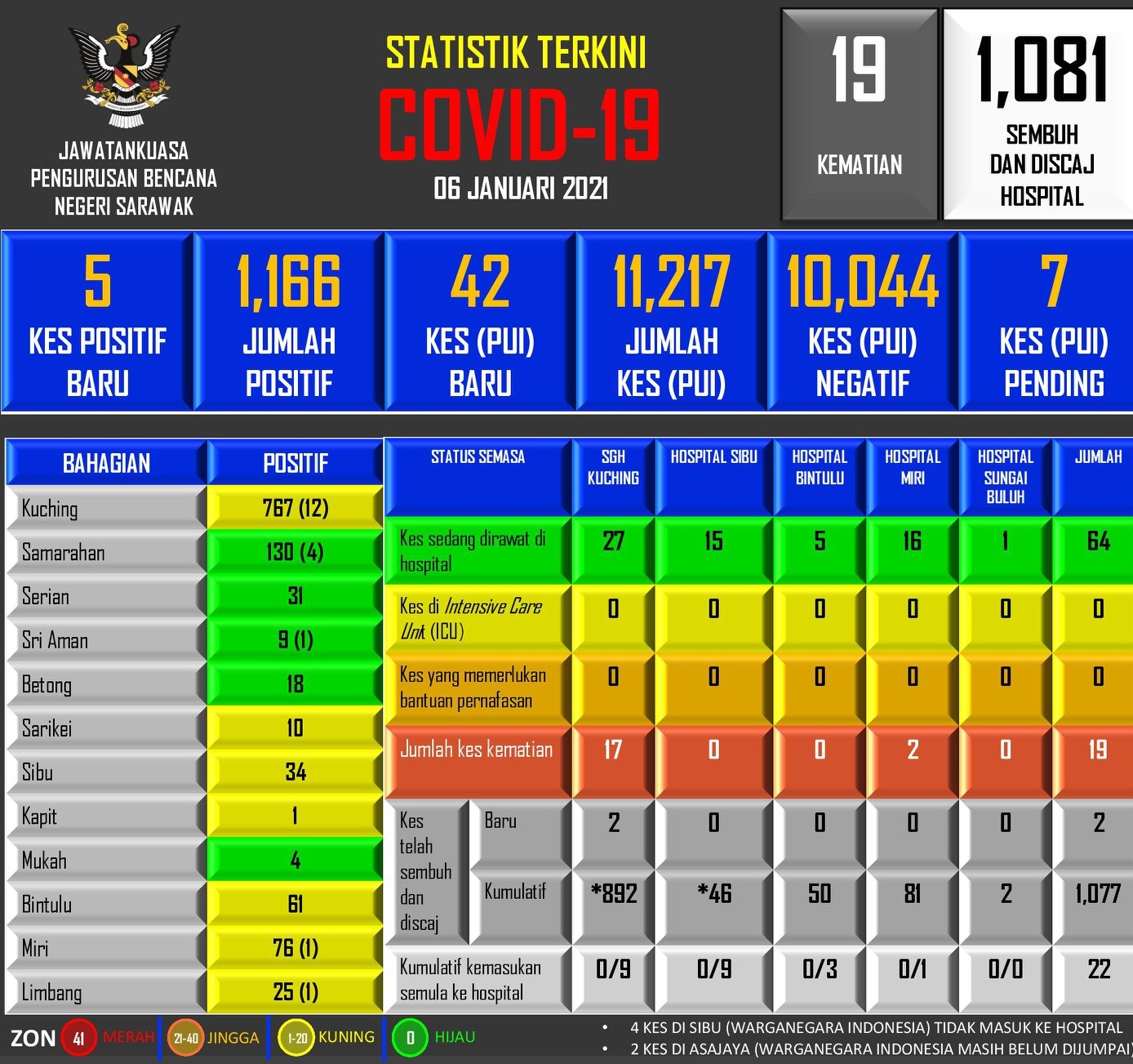 State Disaster Management Committee (SDMC), in a statement on Wednesday, said of the total, two cases each were detected in Kuching and Miri districts and one in Sibu district.

In Kuching district, Case 1,162 is a local man who was detected through contact tracing of individuals who had close contact with a positive case in the Stutong Cluster.

The case went for Covid-19 screening test on January 4 and was found to be positive on January 5. The case has no history of movements abroad or travel to high risk areas in any other state in Malaysia. He is a workplace contact of Case 1,118.

“Case 1,163 is a local man who came from Miri for treatment at a private hospital here. The case boarded a flight from Miri to Kuching on January 4. On arrival in Kuching, the man went to a hospital where he was screened for Covid-19 before undergoing a medical examination. The second screening test was done at Sarawak General Hospital. He was found positive on January 5,” said SDMC.

It added that investigations showed that the case had visited Kuala Lumpur from December 14 to 20 and had undergone quarantine for 14 days after returning from Kuala Lumpur.

“The case also went for screening tests during the quarantine period on December 22 and 28. Both rT-PCR screening test results were negative.

The case complained of having cough symptoms since November 23. This case was categorised as an imported case.

On the two imported cases in Miri district, SDMC said, “Case 1,164 is a local man who entered Sarawak via Miri Airport from Labuan International Airport on December 24. Prior to returning to Sarawak, the man went for a screening test on December 21 at a private laboratory. The rT-PCR test results of the case were negative for Covid-19.

“The case is a local man from Pahang. He entered Sarawak via Miri Airport from Kuala Lumpur International Airport (KLIA-2) on December 31.

“On arrival at Miri Airport, he was ordered to undergo quarantine at a rented house in Taman Jelita, Miri. He went for Covid-19 screening on January 2 and was found positive on January 5.”

On the Covid-19 case in Sibu district, the committee said, “Case 1,166 is a local woman who returned to Sibu from Johor via Senai International Airport to Sibu Airport on January 4. She was screened upon arrival at the airport.

“The case and her two children were given home quarantine order for 14 days and transported by a relative from Sibu Airport to a house in Taman Satria, Sibu in a private vehicle.

“The screening test conducted on January 4 found the woman positive while the children were negative.”