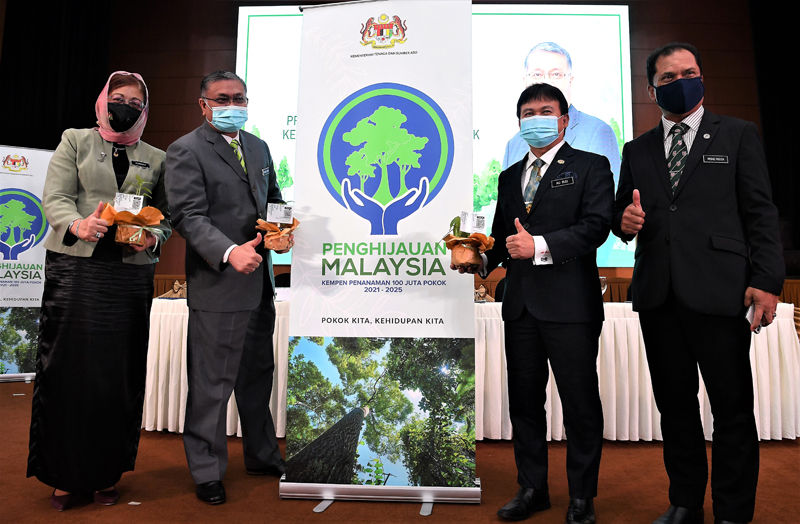 PUTRAJAYA: Malaysia will step up ‘greening’ of the country from next year through a campaign to plant 100 million trees over five years until 2025.

Led by the Energy and Natural Resources Ministry with the cooperation of the Forestry Department of Peninsular Malaysia (JPSM) and state forestry departments, it entails efforts to mobilise society to join the government to plant trees to achieve the target.

Energy and Natural Resources Minister Datuk Dr Shamsul Anuar Nasarah, in a press conference after the pre-launch of the ‘100-million Trees Planting Campaign 2021-2025’ here today, said the target for next year is planting 20 million trees.

He said departments under the ministry will focus on planting the national tree, which is the Merbau tree, and species that are becoming extinct while the public, private sector and non-governmental organisations will be encouraged to plant trees that have many branches.

“Plant one tree. If all Malaysians do that, it will speed up achieving of our target,” he said.

Shamsul Anuar said monitoring of execution of the campaign themed ‘Greening Malaysia: Our Trees, Our Life’ will be done using the application ‘Penghijauan Malaysia’ and website www.100jutapokok.gov.my.

“The application and website can be accessed by all ministries, departments and the public who will function as counters for recording the number of trees planted during the duration of the campaign,” he said.

Agencies under the Forestry Research Institute of Malaysia (FRIM) and JPSM will also monitor implementation and care of trees in the campaign, he said.

Shamsul Anuar said it is being undertaken to expand awareness among the people on the importance of conserving trees and forested areas and maintain Malaysia’s pledge at the 1992 Earth Summit in Rio De Janeiro, Brazil to retain at least 50 percent of the land size of the country under forest cover.

“This campaign is also aimed at raising awareness among the people of the importance of forests to tackle climate change. The trees planted will benefit all life on the surface of the Earth by giving oxygen and to cool the environment and also contribute to achieving ‘Goal 15’ of the SDG (Sustainable Development Goals), that is ‘Life on Land’,” he said.

According to him, Prime Minister Tan Sri Muhyiddin Yassin is scheduled to launch the national-level ‘100-million Trees Planting Campaign 2021-2025’ on January 5 in front of Seri Perdana here.

It will also be launched simultaneously by menteri besar and chief ministers in their respective states.

At yesterday’s event, Shamsul Anuar also launched the official logo of the campaign which combines the three elements of the Merbau tree that symbolise the integrity of forests as well as the unity of the three regions in Malaysia, namely Peninsular Malaysia, Sabah and Sarawak. ‒ Bernama