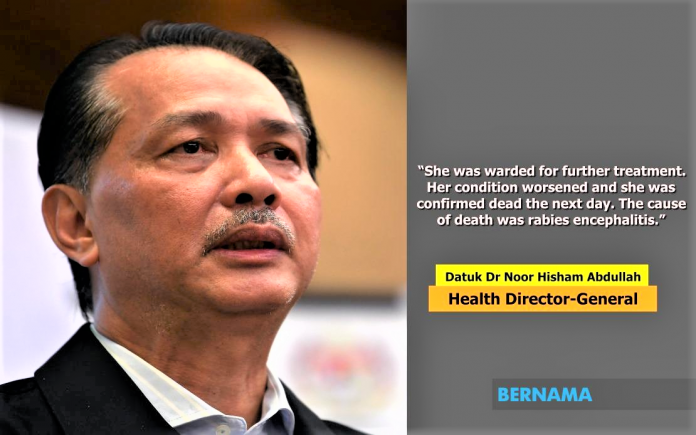 KUCHING: The Ministry of Health (MOH) today confirmed the death of a five-year-old girl in Sibu on March 26 was caused by the rabies outbreak, making it the first case reported this year in Sarawak.

Health director-general Datuk Dr Noor Hisham Abdullah said it had also brought the number of rabies cases to 23 since it was declared in the state on July 31, 2017, and the last time it was reported was on Nov 8.

He noted that the victim was bitten by a stray dog ​​on the face, mouth and eyelids on March 8, however, the wound was not immediately cleaned with water and soap after the incident.

“She was later taken for treatment at Sibu Hospital on the same day and received anti-tetanus vaccine, Rabies Immunoglobulin (RIG) injection and two (2) doses of anti-rabies vaccine injection,” he said in a statement.

The victim was discharged from the hospital on March 13 and given a third dose of anti-rabies vaccine three days later.

Noor Hisham said the victim was taken for treatment at a community clinic in Bandar Sibu due to fever on March 24 and was admitted to Sibu Hospital the next day due to sore throat and difficulty in swallowing as well as hallucinating.

“She was warded for further treatment. Her condition worsened and she was confirmed dead the next day. The cause of death was rabies encephalitis,” he said.

Samples from the girl were taken on March 26 and tested positive for rabies by Universiti Malaysia Sarawak (Unimas) Medical Laboratory three days later, while the stray dog ​​was reported dead on March 10 without samples being taken.

Following the latest case, he advised the people to take preventive measures against rabies infections, when bitten by dogs, which include immediate treatment such as anti-rabies injection, as well as personal hygiene and pets care.

“MOH and Sarawak State Health Department would enhance its collaboration with the state government, the Department of Veterinary Services and other agencies to ensure the prevention and control of rabies infection is fully implemented.” he said. – Bernama