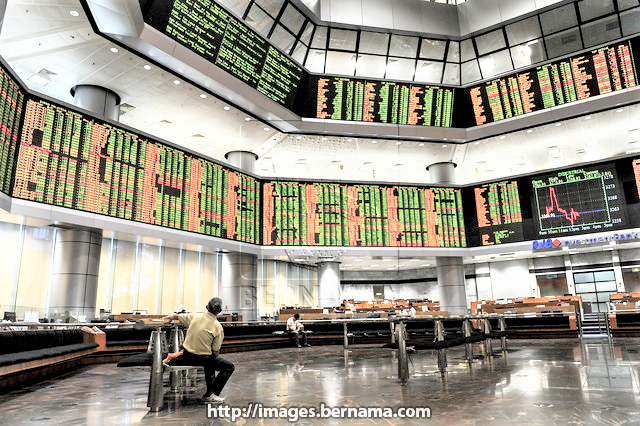 KUALA LUMPUR: Foreign selling decreased to RM55.3 million between June 17 to June 20 period as compared to RM209.1 million worth of equities offloaded between June 1 to June 13.

Local institutions remained as net buyers but with a lower interest of RM45.8 million amount of buying from RM139.2 million last week.

In contrast, local retail investors turned to net seller, disposing RM20.6 million of shares from a buying of RM69.9 million in the previous week.

News on President Trump meeting with President Xi during the G20 summit next week has sparked hope that both parties would reach some form of an amicable solution or at least paving the way for more a healthy trade discussion going forward, he said.

Apart from that, the US Fed according to him is also expected to put in motion plans for monetary easing following the Federal Open Market Committee (FOMC) meeting during the week, whereby seven FOMC participants are expecting 50 basis point cut in the Federal Fund Rate this year.

“In that sense, there seems to be optimism in the markets that global growth momentum can be sustained,” Afzanizam told Bernama.

Last Wednesday, the Federal Reserve as expected, left interest rates unchanged but signalled it is prepared to start cutting rates, if needed, to protect the US economy.

“From the technical standpoint, the FBM KLCI is already in the overbought position, suggesting limited upside potential. As such, the G20 summit will be closely watched next week in order to seek further marker direction.”

Afzanizam anticipates 1,699 points level would be the next resistance level.

The market will continue to track the positive performance of global equity markets, driven mainly by dovish US Federal Reserve (Fed) statements, which is done to create balance ahead of the highly-anticipated US-China trade deal discussion, during the G20 Summit in Japan later this month.

MIDF Investment Bank Bhd opined that the trend of foreign inflows and outflows in the short to medium term to not just be influenced by government policies but also external developments including on the status of US-China trade negotiations.

It said major and emerging economies are forecasted to expand at a moderate pace this year weighed by the continuation of the US-China trade war, fragmented EU, geopolitical risks and volatility of commodity prices.

“On a flip side, global demand to stay firm underpin by low unemployment rate in both major and emerging economies, high consumer optimism in the US and China and moderate inflationary pressure,” it said in a research note.

On local fronts, Prime Minister Tun Dr Mahathir Mohamad has reiterated that he will continue to focus on reducing the country’s debts before ending his second term as the country’s prime minister.

When Pakatan Harapan took over the government last year, the national debt was revealed to be at RM1 trillion.

Meanwhile, the national oil company, Petronas asserted that its strong fundamentals remain unchanged despite a downgrade on its credit rating by Moody’s Investors Service.

Malaysia’s only Fortune 500 company said in a statement that it consistently maintained a conservative financial policy and healthy net cash balance that enables it to withstand volatility and shocks in the market.

This was demonstrated by its first quarter of 2019 and full year 2018 financial results, which was supported by its continuous efforts to increase operational efficiency and commercial excellence.

Moody’s announced it has downgraded Petronas’ domestic issuer and foreign currency senior unsecured ratings to A2 (stable) from A1 (negative). – Bernama

A quiet but a safer Lunar New Year

Good move to scale down CNY do