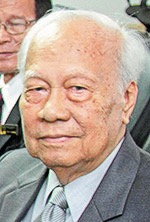 KUCHING: Former three-term Kapit Member of Parliament  Dato James Jimbun Pungga (pic), 77,  passed away at 5.40am yesterday at the Serdang Hospital in Selangor after a long illness due to heart complication.

The late Jimbun originally from Nanga Entawau, the last major Iban settlement in Upper Balleh in Kapit, left behind his wife Datin Senorita Linang and four grown up children to mourn his loss.

According to his cousin Peter Sigie, his remains would be flown here from Kuala Lumpur and was expected to arrive at about 12.45pm today at the Kuching International Airport.

Before his death, he was  the ‘Temenggong’ of the Iban community here, having been appointed to the post on 16 Sept,  2005.

A graduate of the Lambuth College, Jackson, in Tennessee, United States and later the University of Malaya, he had served as a teacher and then a senior civil servant in various state government departments before venturing into politics.

Sigie said he was first elected as Kapit Member of Parliament in 1986 representing the Parti Pesaka Bumiputera Bersatu (PBB) until 1999.

The late Jimbun had  served  as PBB Balleh Division chairman  besides being a member of its Supreme Council from 1986 to 1999,  he said.

He had also served as Song District Officer before being appointed as the chairman of the Kapit District Council in Kapit for a year in 1985 before relinquishing it to join politics.

For his distinguished services, Jimbun had received various state honours, including the “Pingat Setia Bintang Sarawak (P.S.B.S) “ which carries the “Dato” title on 10 Oct,  2010, he added. – Bernama

Ten villages connected to grid, thanks to ALAF

Water supply issues will be a thing of the past: Minister