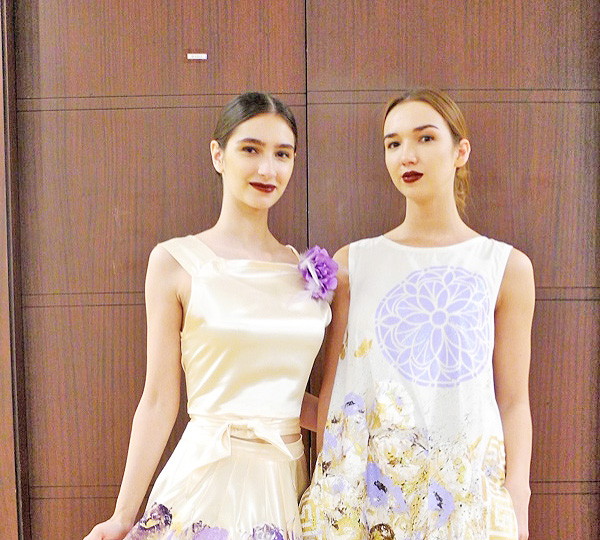 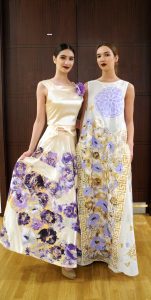 Participating in an event of such scale as the Aspara Fashion Week in Central Asia was a first for us Malaysians from Kuching city. In a team of four with me included were Edric Ong, eco-fiber fashion designer and President of Atelier Society Sarawak; Jacqueline Fong, a hotelier running Tanoti Sdn Bhd, an enterprise for the preservation of heritage craft and Melinda Omar, a former model and rising star in the local design scene.

A nine-hour journey via Singapore took us to Tashkent, the capital city of Uzbekistan, a developing nation with a Soviet past. The region housing Uzbekistan and its neighbours was an integral part of the old Silk Route which linked China to the Mediterranean.

This year the Women’s Committee of Uzbekistan and Hunarmand Association organised the Aspara Fashion Week (AFW) on April 26, 27 & 28 at the Uzbekistan Fine Arts Gallery. It was also under the guidance of Aydarhan Kavier, a renowned designer from Kazakhstan, who established the event’s reputation when it was hosted by other cities in previous years.

At the press conference we were relieved that there were headphones and translation services available as speeches were delivered in the Russian language. The Deputy Prime Minister of the Republic of Uzbekistan and Chairman of the Women’s Committee, Tanzila Narbayeva, and Deputy Chairman of the National Commission for Women, Family and Demographic Policy under the President of the Republic of Kazakhstan, Yelena Tarasenko, both noted that cooperation in political, social and cultural enlightenment areas is consistently developing between the two countries.

It was during the press conference that we mingled with the representatives of various government ministries and agencies, public organisations, employees of international organisations and diplomatic corps, international guests, domestic and foreign designers and fashion industry specialists from the United States, France, Great Britain, Italy, China, Georgia, Russia, Cyprus and others. Adding to this were esteemed media representatives including an Elle Italia journalist from Milan and a top photographer for Vogue and other famous fashion magazines.

In the midst of it all, we took the opportunity to promote our Malaysian events to fellow attendees and extended invitations to visit Sarawak. It was interesting to meet so many Central Asian designers and to understand how they have adapted the charm of their national costumes into modern fashion, which certainly demonstrated the rich culture and resources of their region.

The event never failed to exert an Asian identity and was an ideal platform for designers to stimulate their creativity and observe developments in Central Asia. On the second day of AFW, our Malaysian designers took part in the judging of a young designers’ competition which offered several winners the opportunity to showcase at different fashion weeks abroad.

The 2-days’ worth of shows saw us backstage working with dazzling Central Asian models for our three Malaysian designers. Edric Ong’s eco-fibre fashion bearing his signature originality and unique crafted accessories stunned the audience. His textiles were dyed with natural dye from wild berries, local indigo leaves and even barks from our Borneo rainforest.

Tanoti’s handwoven silk songket by Jacqueline Fong’s team of young weavers in Kuching demonstrates a whole new style to the use of traditional textiles. It even has pure white woven silk for a modern wedding ensemble.

Melor by Melinda Omar features a blend of Sarawakian cultural identities by using the traditional Malay ‘Kerimkam’ and the Iban ‘Pua Kumbu’ textiles. The results were rather pleasing.

As expected, AFW showcased varied forms of silk fashion as the region has always been a major producer of the coveted material. Among others, we found the strong exertion of cultural details most fascinating.  These included the likes of a classical ballet intro in one round; headbands, earrings and accessories made of felt and other materials ; amazing works of acrylic art upon fashion wear and also a runway presentation reminding guests of the people’s lineage which can be traced to Genghis Khan.

Central Asia may be new to some but with such a diverse group of races bearing beautiful distinct features and much silk fashion in the region, the Aspara Fashion Week is bound to draw greater attention in the near future.  With the establishment of a modern-day Silk road already in progress, it is not difficult to envision the improved movement of goods and ideas, including fashion, from Eastern and Central Asia across to Europe by both land and sea.  – By Vicky Fong

Niranur Upside Down 3R House: Beyond the ordinary

Working from home, is it the ideal situation?

Living life on a different altitude